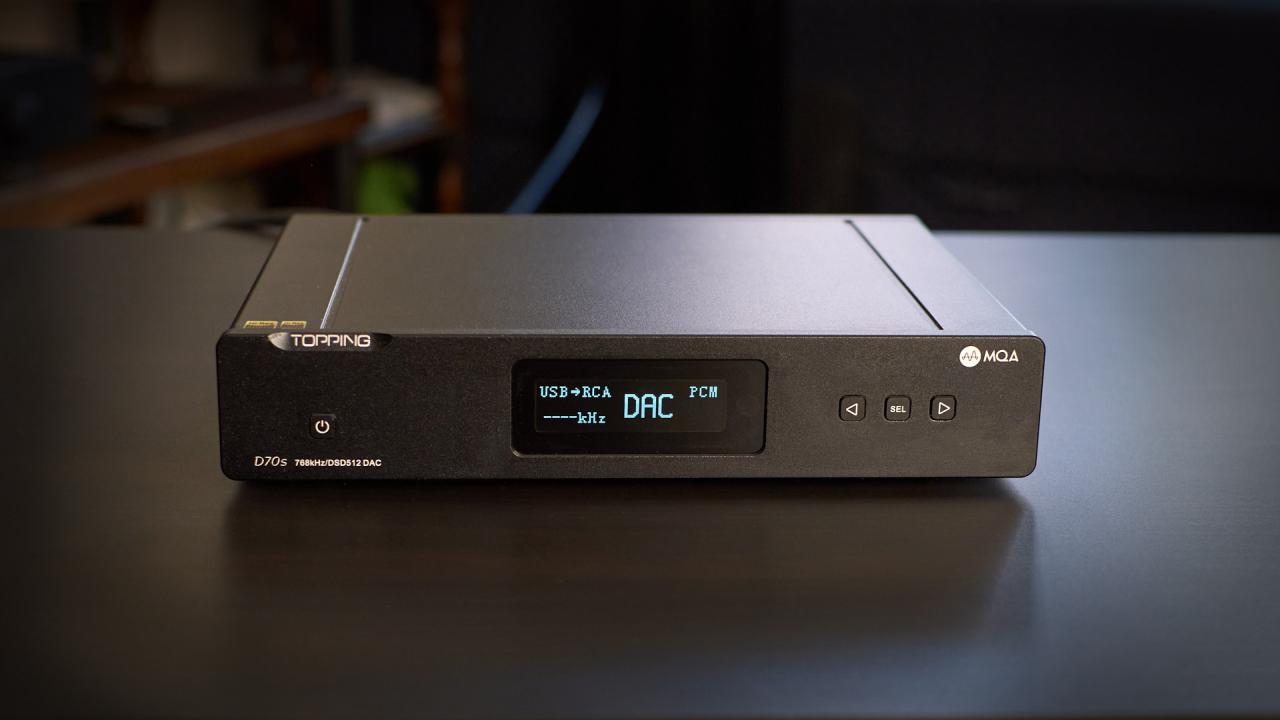 Topping D70s is a DAC located just below the brand’s flagship D90. Now, I’ve been a follower of Topping’s work since the very beginning when their most expensive DAC was just a tad over one hundred dollars. Topping came a long way since then, introducing better and better DACs, not just in a very budget-oriented part of the market, but adding to their portfolio with more premium products such as this one. D70s carries a price tag of 650 USD but it has a lot to show for it, so let us begin.

Topping is known to use aluminium even in its lower-end products, so it doesn’t come as a surprise to find out that D70s feels sturdy and substantially weighty. The only thing that’s not thick metal is a remote control, that one is plastic but functional and responsive, so not much to complain about there either.

On the front it is a simple affair really, a monochromatic OLED display is easily readable, while few buttons provide the means of controlling DACs functions. The real fun starts when we take a look at the back of the unit. There’s basically any digital input that you could wish for, including USB, Optical, Coaxial, AES, and I2S over an HDMI connector. Bluetooth is also present if you wish to connect wirelessly, but bear in mind that you will sacrifice some clarity and fidelity in the process. When it comes to analog outputs, we have both single-ended RCAs and balanced XLRs onboard.

Lastly, the power inlet is a full-sized IEC that will accept 110/220 V AC, depending on the region you’re in. This means that the whole power supply is located inside of the box, so no need, and no way really, to purchase aftermarket power supplies as a way to upgrade your sound. A quick look inside the unit reveals, that the inbuilt power supply is of a linear variety, which is usually a good sign.

Topping D70s is a quite straightforward DAC, which usually means there is not much to talk about when it comes to features. That said, there are still a few settings you can alter so let us quickly go through them. Dimming the display in three different steps of brightness is a neat touch. But engaging the display auto-off function when no controls are being used is absolutely crucial to preserve OLED after many years of use.

D70s can be used as a preamp too with its variable output level. That said, it’s more of a helping hand for those having power amplifiers until they actually get a proper preamp with higher voltages on its output. As basically any other DAC with attenuation, D70s also can’t match the sonics of a dedicated preamp. Putting D70s in a DAC mode will fix the output level at its maximum, which is slightly higher than the average. That means that we’ll get 2.5 V on the single-ended RCA outs, and 5 V on the balanced XLR outs. This is of no particular importance unless you compare this DAC directly to other units that would usually go with 2 V and 4 V, so be sure to volume match before making any conclusions.

Regarding formats, Topping D70s will accept literally anything you throw at it, including PCM up to 768 kHz and up to DSD512. Even the full hardware unfolding of MQA files is supported if you care for it (MQA is a lossy algorithm for compressing Hi-Resolution files to save bandwidth, used on Tidal streaming service for example).

Lastly, when it comes to sound-altering settings, Topping lets you choose between several digital filters. Their differences range from noticeable to almost indistinguishable. That said, I did notice that filter number 4 is the sharpest sounding one with the quickest note decay, making the DAC the most analytical sounding. Opposite of that was filter number 6 which gave a sweet but somewhat soft presentation. I prefer something in the middle, which was achieved using either filter 1, 2, 3, or 5 that I barely distinguish from each other. Anyway, you should probably listen to them for yourself and decide which one matches your system and your taste the best.

Hooked to my usual Hegel H90 integrated amplifier and KEF LS50 speakers, D70s proved to be a worthy contender to some of the best DACs I’ve heard under one thousand USD. Starting with the bassline, I wouldn’t call it the fastest and most wiry bassline I’ve ever heard, but it’s definitely neat and tidy with just enough weight and fluidity not to be overly zealous. It’s a very fine balancing act, one of the best in this price range in my opinion. Moving up the frequency spectrum, the sense of quickness and clarity continues. Fortunately, there is no excessive sharpness or edginess to talk about, so D70s is overly a smooth performer. The highest frequencies are well extended and able to reveal plenty of air from the recording.

Dynamics, both macro and micro, is quite strong too and D70s will follow the fast-paced rhythm section with ease. Soundstaging capabilities are quite decent, with respectable width but with a fairly moderate depth. Instruments are well separated and precisely etched inside of the scene.

All in all, Topping D70s presents itself as a well-rounded performer. Good dynamics, sound-staging, layering, and neutral tonality that lean to neither warm nor overly analytical. It’s simply a perfectly capable DAC that should match nicely with most systems. But the real test is comparing it to some of the fiercest competitors, so that’s what we shall do.

Topping D30 Pro – is one step lower in the Topping line with the price of 399 USD. It’s a very decent DAC for the money with a weighty bassline and wide soundstage. However, when faced directly with D70s it quickly becomes obvious that D30 pro can’t resolve the same amount of details. Its warmer bassline is slower and slightly bloomy next to D70s’ quick and resolving one. Up the frequency spectrum, D70s keeps sounding cleaner and smoother compared to a somewhat grainier rendition of D30 pro. To finish this comparison, D70s sounds a bit more spacious too. As decent of a DAC as D30 pro is, there’s no beating around the bushes that D70s is clearly the more capable one. Given that its price is more than fifty percent higher, it seems there’s nothing unusual happening here.

Denafrips Ares II – is an R2R DAC costing 750 USD which is slightly more than D70s. It’s simpler when it comes to features too. There is no remote or volume attenuation here, just a good old DAC with a fixed level line out. Differences continue when it comes to sonics too. Ares’ bassline is not as nimble and precise as D70s’ so it feels somewhat slower and less resolving, but denser in return. Ares II is meatier sounding in general, with fuller mid-bass and midrange. It sounds more voluminous in general, rendering very lush and lifelike vocals and acoustic instruments with great timbre. D70s is quicker, with crisper edges and more micro details. Every tone sounds more precise and more etched with Topping, but somewhat flatter and less three-dimensional in space. Finally, D70s produces a squeaky clean highest spectrum whereas the one on Ares II sounds a bit grainy in comparison. That said, there is a slight metallic sheen with D70s while Ares sounds softer. I found this difference similar to comparing a metallic dome tweeter (D70s) to a soft fabric dome one (Ares II).

All this said, I still can’t choose which one sounds better. I feel they’re both equally capable in their own way and which one would serve you better will mostly depend on your own taste and the rest of your system. As far as my system and preferences go, Denafrips Ares II’s meatier tonality suits my Hegel H90 and KEF LS50 nature better.

SMSL M400 – is a very different beast with an overall warmer tonality. Bassline feels fuller, and warmer, but also not as quick. The same goes for a midrange that’s creating very full and lush vocals. Combine that with slightly tame and sweet highest frequencies, and you’ll get the picture – M400 is a fuller and sweeter sounding DAC. D70s on the other hand etches tones more precisely, the bassline is quicker and more resolving, while the highest spectrum extends more revealing more air from the recordings. The choice is once again more dependent on your own taste and system than anything else. For pure enjoyment, I would personally rather listen to a lusher and sweeter M400, but if you praise neutrality and quick sound more, Topping D70s is the way to go. It’s also 150 USD cheaper, so there’s that too.

Topping D70s is a well-built, feature-rich, and good-sounding DAC. Add to that a very competitive price tag and there’s a lot going on for D70s. If you’re not specifically looking for a warmer and sweeter tonality, there’s nothing stopping me from giving D70s my highest recommendation.

UPDATE: Few score points were knocked off since the initial review due to the arrival of new competitors such as SMSL M500 MKII. 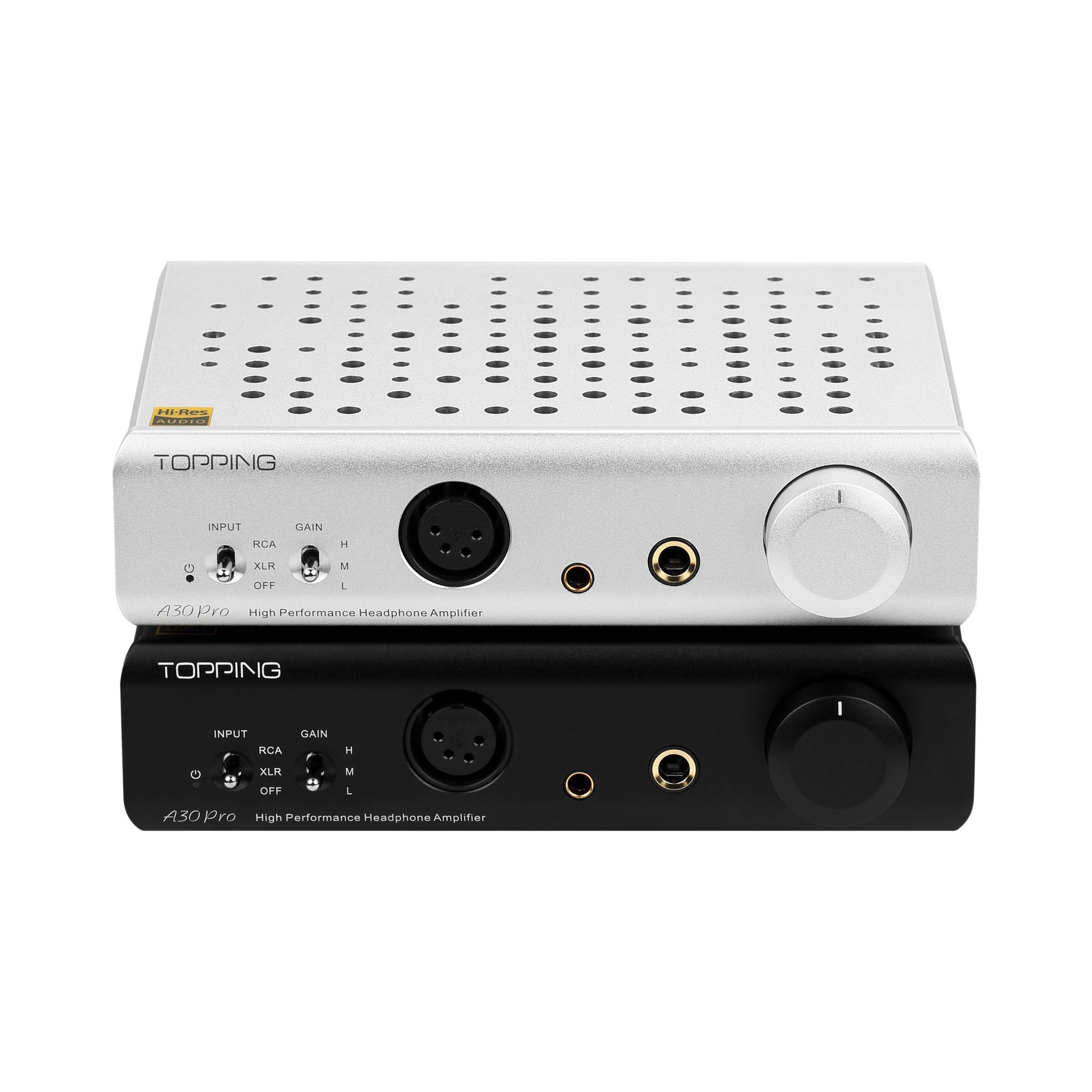