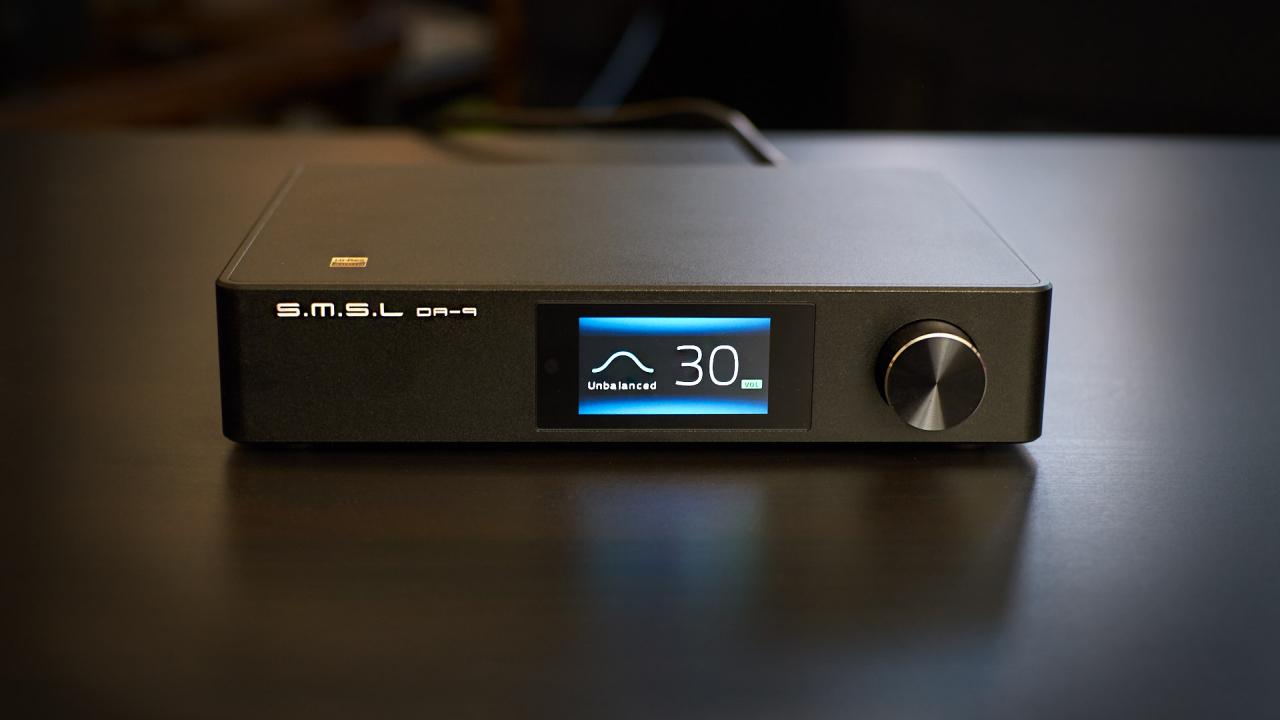 SMSL DA-9 is a small integrated amplifier without anything especially striking at a first glance. At this point, I can easily say that I’m well acquainted with SMSL as a brand. Having tried many of their DACs scattered in different price categories, I always found them to be very good-sounding products and great bang for the buck. Even though I fully expected DA-9 to perform well, I was not expecting it to perform this well for the asking price of just 250 US dollars. So folks, fasten your seatbelts cause you’re in for a ride.

Taken out of the box, SMSL DA-9 looks small and inconspicuous. The finish is nice with the enclosure being fully made of aluminum. The front panel is simple with a color display and one knob that doubles as a button. You can handle everything using this one, but a convenient remote control is provided in the box too. Taking a look at the back, we find essentials such as an IEC power inlet and a set of speaker binding posts that will accept banana plugs, spades, and bare wire of a smaller diameter. There’s a dedicated subwoofer output too, which is not that common in this price range so it’s a nice touch. When it comes to inputs, we are offered two sets of analog inputs, a pair of each single-ended RCA and balanced XLR. Finally, there is also Bluetooth 5.0 connectivity onboard, and that’s what the removable antenna is for.

As you can see, due to its diminutive size and space restriction, you don’t get several line inputs as you might come to expect with more traditionally sized amps. Furthermore, speaker binding posts are quite small and kind of cramped. On the other hand, getting fully balanced inputs is very unexpected at this price point.

In the heart of SMSL DA-9 lies a class D amplification module made by the German producer Infineon. SMSL actually claims two of the Infineon class D modules are used to produce a fully balanced design. They’re also providing a very decent amount of power in such a small body, something that wouldn’t be possible with a traditional class AB design. So DA-9 is capable of delivering 50 W into 8 Ohms load, but the power almost doubles at 90 W at 4 Ohms, and then again at 150 W at 2 Ohms. There are basically no speakers declared at 2 Ohms, but this means that the amp has a healthy amount of power reserves and will not be easily scared by speakers that have noticeable impedance dips (heavy load basically).

In the spirit of using new technologies, SMSL didn’t use a typical attenuation potentiometer but decided to go with volume control chip NJW1194. As I have not encountered this type of construction so far, I’m curious to hear how the unit fares when it comes to sound quality.

When it comes to Features, DA-9 feels very modern. First of all, there’s a color display that you can use to navigate sources as well as other settings. Those other settings include several EQ modes as well as Bass and Treble adjustments. Important to note here is that you can opt to disable all of the EQ settings by simply choosing a direct mode, which is set as a factory default. Small details like dimming the screen to your preference are also on-board. This is much more than a usual amplifier will offer you these days.

I’ve started testing SMSL DA-9 in a price appropriate environment, hooked to the Loxjie D30 DAC on the one side and on the Elac Debut 2.0 B5.2 speakers on the other. Both of these are brilliant budget-friendly components, and I was immediately struck by the firm bass control and crisp sound that didn’t have any obvious shortcomings. Just a few songs in, I have realized this small amp performs better than I had any right to expect, so I excitedly moved it to my main setup. This one includes very price inappropriate Denafrips Ares II DAC and KEF LS50 speakers. This somewhat irrational move proved very revealing to the fact that SMSL DA-9 was clearly held back by the other components in the first setup.

The first thing to notice was how firmly in control of somewhat unruly LS50’s this small amp was. Bassline extended as deep as these speakers allow it to but more than that it sounded neat and punchy, without any trace of bloating. Upper registers are handled in a similar fashion, with clean and tidy tones striking with energy and intent. Because of it, DA-9 is tonally on the energetic and somewhat analytical side of things. For those expecting warmth and silky smoothness, better look elsewhere. That said, I never felt that DA-9 is overly sharp or sterile sounding, which is not that uncommon with many class D amplifiers.

Dynamically, SMSL DA-9 sounds very lively and brave. If speed, energy, and excitement are required, this amp will deliver them in a spectacular way. It’s almost hard to believe that kind of zest is coming from such a tiny amp, but it does.

Soundstaging is yet another area SMSL DA-9 does exceptionally well. The virtual stage is wide and layered with the skill that’s basically unmatched at this price point. Vocals are firmly locked in the center of the stage while instruments are pinpointed with admirable accuracy. At this point, I was well aware that we have a true gem here and it was time to test it against some proven opponents.

NAD D 3020 V2 is a much more versatile solution with both analog and digital inputs, meaning it’s offering an integrated DAC section. There’s also a phono input onboard for connecting your turntable if you happen to use one. That said, I was interested in its amplification section this time so I connected a few of my own DAC’s to it and compared both of these amps. It didn’t take much to realize that NAD sounds considerably warmer, with the heavier but more sluggish bassline. Midbass is bleeding into the midrange more, making it fuller sounding too. DA-9 on the other hand presented a much tidier and quicker bassline. It sounds leaner but much more energetic too. Finally, when it comes to the soundstage and pinpointing vocals and instruments, DA-9 is a clear winner – it simply feels like a small blanket has been removed from the speakers in comparison to D 3020 V2.

Yamaha WXA-50 is another all-in-one solution that even includes a network streamer. It’s a great value too, but again I was interested only in its analog section this time. Yamaha proved to be quicker and more resolving than NAD, but somewhat dryer sounding too. SMSL DA-9 sounded both more energetic and more fluid than Yamaha, with better layering too. So WXA-50 is a better and closer opponent to DA-9 than NAD’s amp was, but SMSL DA-9 is still a clear winner to my ears.

Hegel H90 is a much more expensive integrated amp, and the only one that uses the old-school class AB construction, meaning it’s much chunkier too. This comparison might feel out of place and utterly unfair to small SMSL, but I was eager to test its limits. To put it shortly, Hegel H90 did outperform DA-9 with a deeper soundstage and similar if a slightly higher level of subtle details that sounded more refined and less forced. That SMSL DA-9 really held its ground and the gap between the two was much smaller than I would ever dare to expect.

To conclude this part of the review, SMSL DA-9 leapfrogged both NAD and Yamaha, and it was stopped only when eight times pricier amp was brought into the fight. It actually sounded closer to Hegel H90 than it did to NAD D 3020 V2.

SMSL DA-9 is small in appearance but big when it comes to its skills. If it was priced two times its price, I would still have trouble finding it an equal. But at $250 I can only say this little amp is a steal. I can easily imagine it in a system containing the source and speakers that are twice the price, and DA-9 in most of those cases would still be the strongest link in the chain, it’s that good. Now it’s time for the competition to answer the challenge given by the SMSL, but until then I’ll be recommending this one gladly. 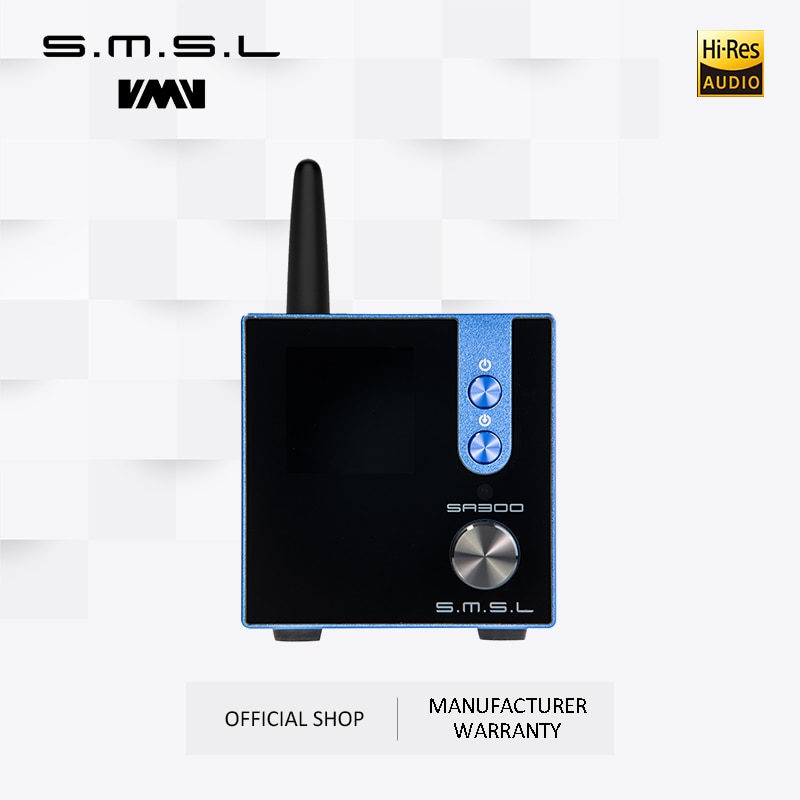