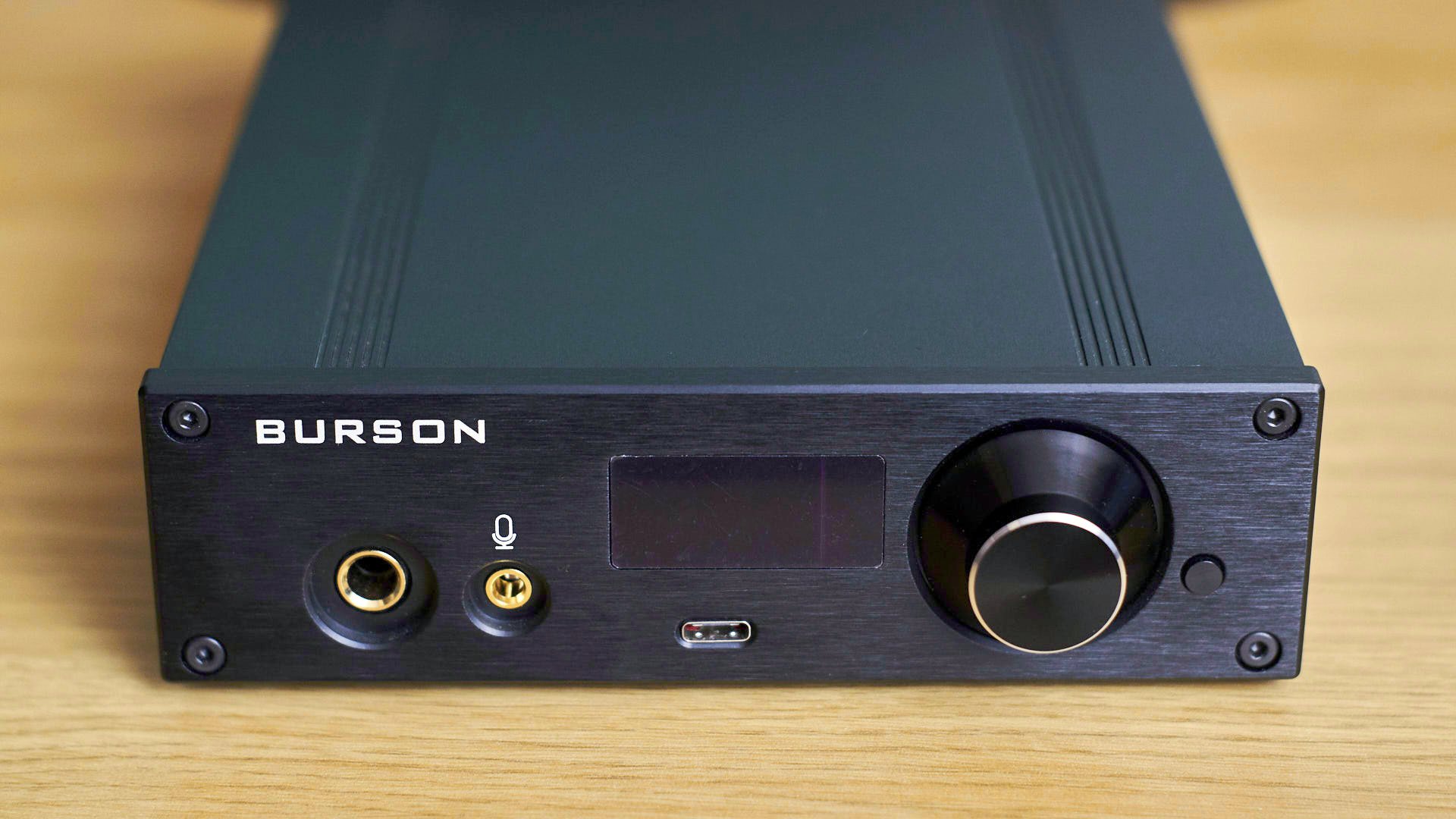 Burson Playmate is a D/A converter, preamp and headphone amplifier combo. It’s based around well known ES9038Q2M DAC chip from Sabre. A device is not its chip however and the circuitry around it is what makes the final result. Burson is taking special pride in their unique power supply design. They call it Max Current Power Supply or MCPS for short. As the manufacturer claims it’s supposed to deliver high power and low noise at the same time. You can read more about it here as I’ll not get into technical details.

Another interesting detail is that Playmate’s output op-amps are working in class A. Combine that with relatively high power rating and you get a case that can get quite warm as it dissipates that heat. That said I never felt it is uncomfortably hot to the touch.

Looking from the outside, Playmate is a black, nondescript aluminum box but I like its simple and industrial design approach. An interesting and unusual thing about it is that you can fit it in a PC case, and fix it there as yet another 5.25” device. Beware that Playmate heats a lot, so if you decide to stick it in a PC case it’d better be well vented. I haven’t tried doing that but used it as a typical desktop product instead. The power switch is located on the back panel, as well as two different types of 12 V power inputs. One to connect your power brick and the other one to attach it to PC’s internal power supply if you use it that way. There are 3 types of digital inputs here: USB-B to connect to your PC, USB-C for smartphones and tablets, as well as on optical input. Regarding outputs, we have a pre-amp out over a pair of RCA connectors on the back and a 6.35 mm headphone out on the front.

Only one quirk during the course of this review was observed. Moving the unit around while it’s powered on can result in a power reset. I’m not sure if this is due to a power plug or something else but I guess most of you will not move it around as much as I did during the review process. That’s why I’d suggest connecting all of your cables first before powering the unit on, as well as powering it off first before meddling with cables on the back.

When turned on, you navigate the unit by using the knob and one button on the side. There are few settings in the menu that you should be aware of as they do make a noticeable impact on sound quality. I usually don’t like bothering you with settings and stuff, but some of these are very important for achieving the best possible sound fidelity. The very basic user manual will not help you much here so let me lend a hand:

HP OUTPUT: You can choose between LOW and HIGH. It’s basically a low gain and high gain mode. Changing this affects both headphone-out and pre-out. Repeatedly I found the high gain mode to sound better and more dynamic. It goes for both headphones out as well as for the pre-out. A thing to be aware of is that at its high gain mode, Playmate will deliver higher than usual voltages. So if you use its pre-out, make sure that the next amplifier in line supports such high voltages before you turn the volume to the max. My Cyrus 8vs2 integrated had no problem accepting such high voltage pre-out. That’s where sound quality was the best actually but more on that later.

FILTER: Here you can choose one of the seven basic digital filters. It’s a usual affair of linear and minimum phase variations with fast or slow roll-off. You can find info about those filters on the web and you should try them yourself to see which one suits you best. I ended using Apodizing fast called AP fast here.

DPLL: Is the strength of jitter rejection. By default, it’s set on high for both PCM and DSD signals. This is a safe choice and means DAC will have no trouble locking on the incoming signal. I suggest experimenting with it as lower settings do increase fidelity. In my case, I settled with a low setting and didn’t notice any connection losses so far. But I did immediately notice increased transparency and resolution of the sound. Putting this back to high introduces softness and slight muddying of transients.

EMPHASIS: It was off by default on my unit and that’s how you should keep it. Turning it on attenuates a range of highest frequencies making Playmate’s sound artificially warm. I don’t see a good reason for doing that.

Now that’s done, let us proceed to the most interesting part.

I played with the settings a lot and settled at High gain mode and low DPLL for the best sound. I set the volume to 80 as that roughly translates to standard ~2V which makes it easy to compare to other DACs. That made me ready for some critical listening through my main system consisting of Cyrus 8vs2 and KEF LS50. I was treated with a very well balanced sound. It combined good energy and weight with sharp detailing. Bass notes are deep with a slight warmth to them, but with a respectable amount of control and texture. The midrange is warm and rich, making vocals and instruments sound well focused and present. Going into higher register I found it detailed but maybe a bit soft on the edges. It makes a very pleasant listen but not the most revealing in that top register.

To sum my impressions here I’d say – It somehow manages to sound very revealing, but at the same time warm, lush and comforting. If you could imagine a sound that could open its arms and hug you, this is how that would feel like. If you’re using Playmate as a pre-amp that is it’s signature and I quite liked it.

I was experimenting with volume control. I don’t really need to use it as long as Playmate is connected to my integrated amp with its own volume control. Playmate is acting like any other DAC here so I cranked it all the way to 99, corrected volume on my amp and realized something was different. Some of the warmth from the upper bass disappeared leaving neat and tidy bass notes. Vocals started to sound a bit leaner but more nuances and details were revealed. Finally, some sort of slight veil was removed from the highest spectrum, making everything sound crisper. I started listening to the same songs again to confirm this. There was no mistake, sound overall had more bite and attack on leading edges, as well as more transparency and fine texture.

A quick comparison with Topping D50s showed that Playmate is capable of digging even more micro details. It’s especially good at removing blur from some bass and mid-bass notes. I didn’t even notice those were slightly blurred until directly comparing two devices. Elsewhere it was a close call but I kept preferring Playmate in my setup for its better attack and focus. That says a lot about Burson’s DAC integration that is clearly great.

It was time to try Playmate’s headphone-out. I’ve decided to start with a low gain mode. It provided enough power to drive my AKG K92, Takstar Pro 82 and friend’s Byerdinamics DT990. However, once I switched to high gain mode, all of these provided livelier and punchier sound to my ears. Only some of my sensitive IEMs like Tin Audio T2 were better suited for low gain mode. The first reason is that volume starts getting loud very quickly if I use them in high gain mode. The second one is that I could hear a slight background hiss when no music was playing. So, the low gain is for sensitive IEMs, high gain for everything else.

No matter which headphones I used, Burson Playmate treated me with a big and lush sound. Bass notes are deep and precise, never getting out of control and bloated no matter how much I turn up the volume. Vocals are once again full and rich with their natural texture. Instruments are well separated from each other, not crowding around your ears. If recording contains ambient echoes and atmospheric details – Playmate will be able to convey that quite well too. Overall sound signature is a well-balanced mix of quite resolving sound with just a touch of warmth.

I quickly compared Burson Playmate to another DAC/AMP combo – iFi’s Zen DAC. If you ask why I did that when Zen is a much cheaper device, well I had it at hand. Also, I thought it might be a nice chance to face two different price classes and see what do you get for your money. Right from the start, it was clear that Playmate has much more grip on the bass notes. They were simply more precise and articulate. It was also better at handling transients. That means it’s reproducing leading edges of every tone with more energy and byte, making Zen sound a bit muffled in direct compassion.

My sample arrived with plain NE5532 op-amps and that’s how I listened to it. No V6s or any other fancy replacements. Hearing it did make me wonder how big of a difference would op-amp rolling bring, but that’s a different story. If I get around to trying that, I’ll be sure to share my impressions. Playmate managed to leave a very positive impression nonetheless. I can’t do anything but praise its incisive but rich sound over both types of outputs. If you’re in the market for a DAC/Headphone amp combo at this price point, not putting Playmate near the top of your wish list would be a mistake.

UPDATE (2021): Scores were adjusted slightly due to the new and better products released recently.