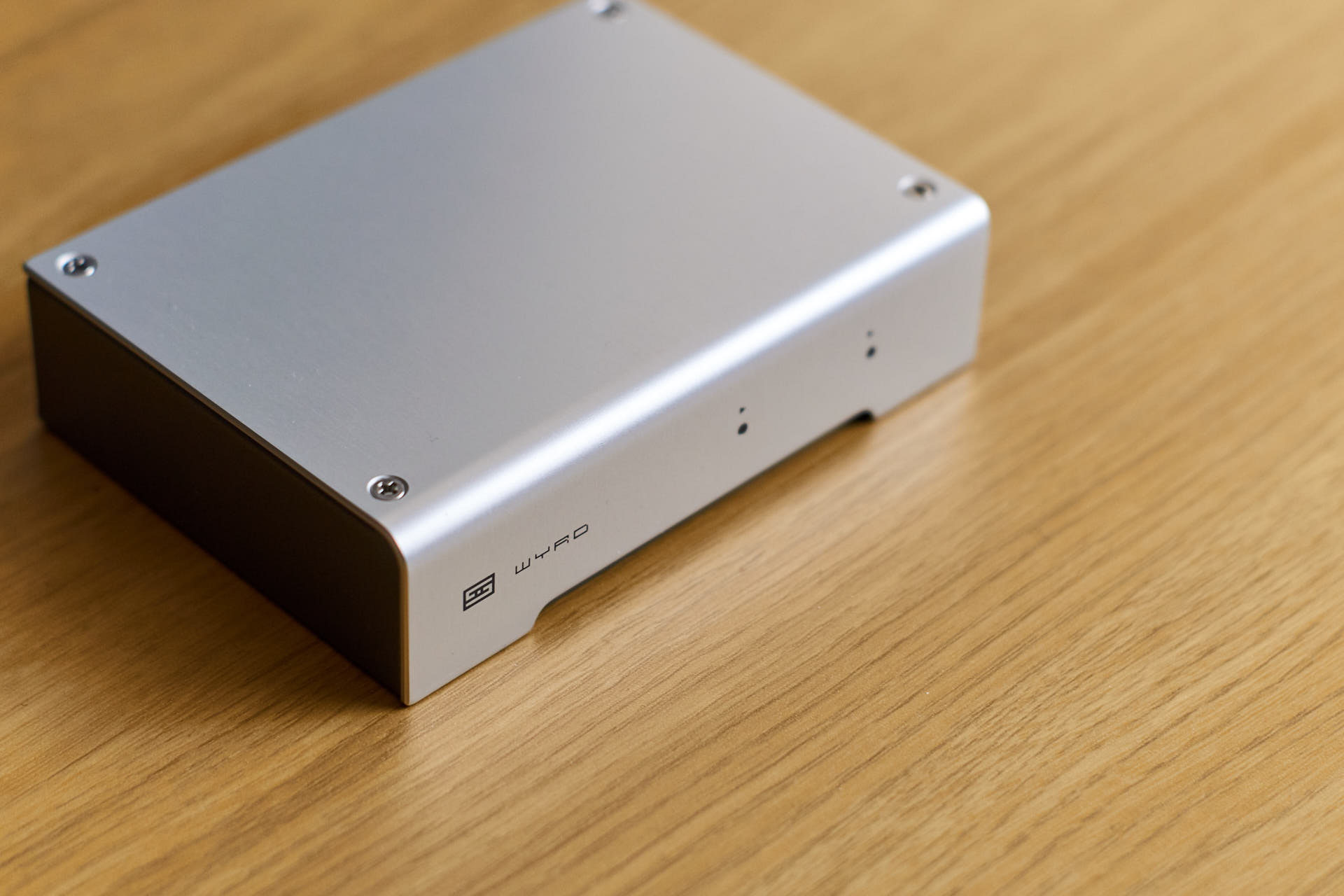 Many audiophiles out there don’t believe that digital signals can be better or worse. Zeros are zeros and ones are ones is their philosophy. Such people would argue that USB regenerators are just a hoax, a snake oil meant to trick us into emptying our pockets. What we have here today is just one such device. Schiit Wyrd is a USB regenerator and recklocker, that made me create a new category of reviews I’ve decided to name “Snake oil”.

Looking from the outside, Wyrd follows the well known Schiit design. It’s a small box covered with a curved brushed aluminum plate. That means it stacks perfectly with any Modi, Magni, etc. On the back, we have just one USB input, one USB output, a power plug, and a power switch.

Regarding functions, this device has only one. It is supposed to take a digital stream of data coming from your PC, digital streamer, etc. Wyrd than recreates that digital stream from scratch, using its own power supply and internal clock. Supposedly much cleaner signal is now sent to your DAC which should have less trouble dealing with noise, jitter, and other unwanted stuff. Finally, that is supposed to translate into better and cleaner sound coming from our DAC and eventually speakers or headphones.

I was eager to test these claims and find out does this device really brings any audible difference to my system.

The first part of the test was conducted with my Win 10 laptop. It’s just a working machine with few free audio tweaks like Fidelizer and Minority Clean. So after hooking Wyrd into its place, the system looked like this:

Going through many songs, doing both longer listening sessions and quick AB switching (Wyrd in/Wyrd out), I could definitely confirm that there is a sonic difference when using this device. The one that was easiest to discern is in the bass region. Bassline became a bit cleaner and with less bloom than before, so bass notes sounded both more focused and more present. Other than that, I could notice some small clarity improvement in both midrange and the higher end of the frequency spectrum. When I say small I mean they’re easily noticeable when doing AB but not that big and important to wow you in any way. When Wyrd is removed I don’t really miss its influence on those upper register, but I do miss that bass firmness a bit.

And that’s basically it, I didn’t really notice any changes in spaciousness, soundstage width or depth. I can’t claim those don’t exist or can’t be heard with better systems and/or ears than mine.

I then switched from PC to Raspberry Pi 3 B+ with Pi MusicBox. This is a combo that sounds cleaner and more spacious than my laptop to begin with. I attached Wyrd, listened for some time and couldn’t really detect it’s influence. I removed it then, listened to the music some more and again couldn’t detect any sonic differences. This was very odd as Pi 3 is not famous for its USB output quality, but it is what it is and I’m just reporting my experience. To me, Schiit Wyrd didn’t influence Pi’s USB output in any meaningful way.

I then asked my friend and my better half to help me with some ABX testing. With Pi 3 they couldn’t detect any differences either. Going back to PC as a source, they could both detect the difference when Wyrd is being used.

The last part of the test included me swapping a few different DACs as well as using headphones instead of my room setup. The outcome was basically the same. Wyrd always improved PC’s output a little bit, but Pi 3’s not so much.

WHO IS IT FOR?

Matter of price and value is another thing I have to address. I’ll go through a few scenarios in which I can or can’t justify such a purchase.

1) If there is a way to improve any of your core components for a similar amount of money. Let’s say going from a really great $100 DAC like Schiit Modi 3 to a great $250 one like Topping D50s – you would get much more significant sonic improvement than buying this small device. The same goes for amps, headphones, speakers… If 100 bucks can buy you a better core component – buying Wyrd is simply not smart and justified move.

2) If your core components are already of such price that adding 100 bucks buys you nothing better. In this case we’re ready to talk about peripherals. In my experience, spending a similar amount on a good set of interconnects or speaker cables, power filters, vibration absorbers for your devices, etc. – yielded more significant sound improvement. For example – placing a set of good interconnect cables which retail price roughly matches Wyrd’s, instead of my decent $20 cables – had a much greater positive sonic impact than Wyrd itself. That’s why, in case you haven’t sorted out cables and power sources first, I can’t justify spending a hundred bucks this way.

3) If all of your core components, and cables, and power filtering are taken care of but you still have a desire to further improve things. Then let’s say you have a hundred to spare, you look at your system costing several thousands of bucks, and you want to pour a little bit more into it. Then and only then I can see a reason for going with a device like this one. In that case, we are talking about measly few percents of your whole system cost – and the appropriately small, yet detectable, sonic effect. Only in such a scenario purchasing this device actually makes sense.

Spending a few weeks with the Wyrd I can certainly tell it’s not snake oil. In some scenarios, it really did bring sonic improvements. Given a choice to listen to the music from my PC with or without it – I’d always choose to use Wyrd. That said if there is a weak link anywhere in your system, your money will almost certainly be better spent tending to that first.