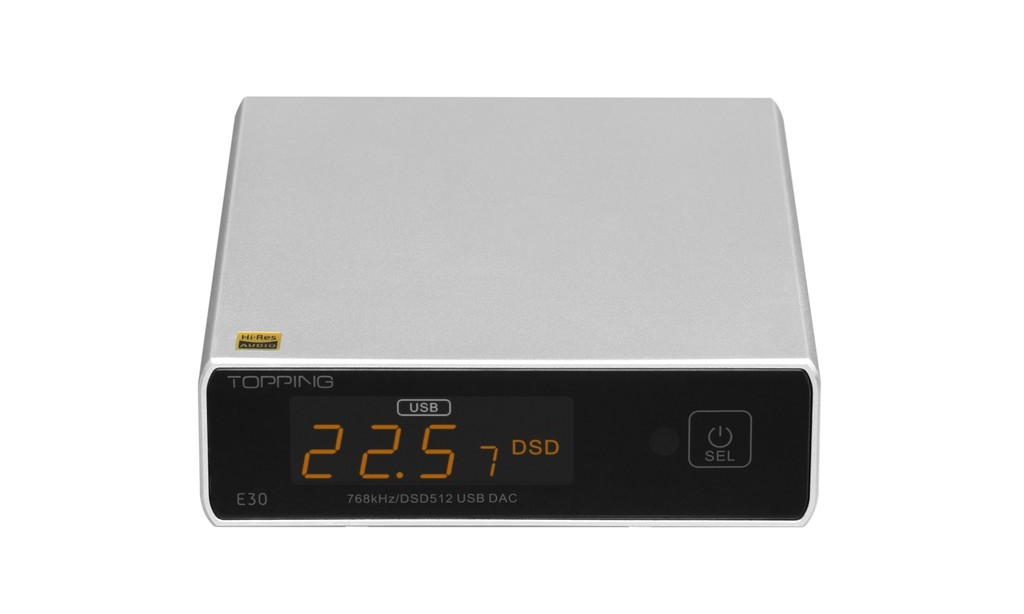 During the last few years, I tried quite a few devices produced by Topping. It all started with Topping D30 – my first leap into the world of affordable Chinese hi-fi. At the time it was a better DAC than anything I’ve heard from western manufacturers near that price. I liked it a lot, but it’s been on the market for some time now, with some great products overshadowing it. Without further ado, I can say that Topping E30 is a worthy successor, a great product that is once again claiming a best-buy title. Yes, I spilled the beans right at the beginning of the review, but keep reading to find out why I like it so much.

E30 is having a whole new look, with rounded aluminum chassis coming in either black or silver finish. The front glass panel is always glossy black. It hosts a two-color OLED and touch-sensitive button. The OLED is dominated by big and readable orange digits, with smaller blue indicators up top. I have a soft spot for orange displays so I fancy this whole look.

On the back, we have all the usual suspects – USB, optical and coaxial inputs, as well as a pair of RCA outputs. And here we come to the first important feature. RCA output can be set to serve fixed line-out of 2 V, or variable signal controlled in fine steps of 0.5 dB. That means you might use E30 both as pure DAC or as a preamp with digital attenuation. The next feature is the bundled remote that can control inputs, volume, OLED brightness and of course send the unit to standby mode.

Lastly, the unit can’t be powered through USB signal port. There is a separate power input and power cable is provided in the box, but not the power supply itself. The end of this cable finishes with a standard USB-A connector so you can use any 5 V wall wart or simply a free USB port on your PC.

In the heart of E30 there is a fresh AK4493 DAC chip coming from Asahi Kasei. Joined with XMOS XU208 USB receiver this means a great format support up to 32 bit/768 kHz PCM and DSD512.

All said and done, both build and features are well thought more than appropriate for the price. But how about sound quality?

I first connected it to the Schiit Magni 3 and Fiio K5 Pro (acting as an amp), and E30 immediately showed its skills. It easily pulls ahead of quite capable internal DAC used in K5 pro. It doesn’t really matter that both are based on the exact same AK4493 because DAC sound quality is not in its chip alone. I switched through several songs and E30 kept revealing more details and crisper edges. The increased liveliness of the sound is the next thing that the internal K5 pro DAC section can’t quite match.

I didn’t notice anything bad or undesirable in the E30’s performance so far, and I was eager to try it in a more challenging environment.

After moving it to my main and much more resolving system, the setup looked like this:

Few songs into the listening session I was startled. Topping E30 sounded better than I could possibly hope for a device of this price. The bassline is deep and meaty, but also well-controlled and with a good sense of rhythm. Tones residing in the midrange are crisp and uncolored, with plenty of texture to be heard in both vocals and all the instruments. Higher frequencies are well extended and again superbly clean. Not once I felt cymbals sound like an indistinguishable paper or aluminum foil noise – a phenomenon quite common with lesser budget gear.

This kind of clarity and precision lands a hand to really good instrument separation. I listen to the Hans Theessink – Slow Train album and the singer is very present in the dead center, with guitar strings having crisp and energetic edges as well as long tone decay and room echoes. Sound-stage is presented in a forward manner. E30 is capable of placing an exceptionally wide image. Playing Roger Waters – Amused to Deth, the soundstage extends well past the speaker’s physical arrangement which is a treat not that often found at this or even slightly higher price range.

Surfing through both slow and fast-paced tracks, watching blockbuster movies or binging Netflix series, I haven’t found any audio material that doesn’t sound great over E30.

Well, I can name one and a half. The one is being that for some reason when I tried using DSD64, playback would get choppy. I tried a few different things but couldn’t make it work smoothly. Oddly enough, higher DSD rates work without a hitch. I hope this is just a driver issue and can be fixed, but in the meantime, it’s something you should be aware of if you own a collection of SACDs (those are using DSD64 format).

The remaining half of the imperfection is not really a flaw but a warning about E30’s transparent nature and disagreement with noisy digital outputs. It will not hesitate to shame the quality of the signal it is fed with. When I pulled my USB regenerator out of the loop, leaving E30 attached to a fairly noisy Raspberry Pi USB port in a very revealing system, some degree of dryness crept in, as well as a slight glare in higher frequencies. I put the USB conditioner back and everything sounds full and juicy again. Using S/PDIF Coaxial or optical to connect my PC and TV, I don’t detect dryness either. To sum it up, E30 is not a dry or thin sounding device by itself but if you expect DAC to add warmth and veil noisy sources, better look elsewhere.

I will not compare it to every single DAC in this price range separately. Instead, I’ll just say this – E30 sounds more resolving and tonally richer than anything else I’ve tried up to $200 and even more. It completely matches and even slightly surpasses the DAC section inside the great Burson Playmate DAC/AMP combo by offering better detail retrieval and more extended high frequencies.

I don’t have D50s with me anymore, but I had it up until recently in the exact same environment. E30 definitely spreads a wider and lusher soundstage. With the newcomer being such an overachiever, I’m not confident that D50s could pull ahead in that duel. I reckon it would be more a matter of preference than anything else.

By now you already realized how impressed I actually am with the Topping E30. It offers fine build, remote control, and a preamp function. More than that, it sounds astonishingly good for the price. Backed up with a low noise power supply and clean digital source, it doesn’t feel out of place even in a pricier system.

The only thing it won’t do is to soften the truth so it’s more pleasurable. Personally, I love it just the way it is and my opinion wouldn’t change if E30 was twice its price. But the $130 price tag makes it one of the easiest recommendations I’ve ever made. 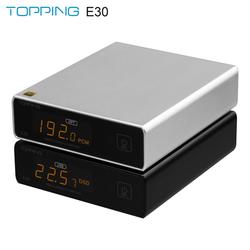