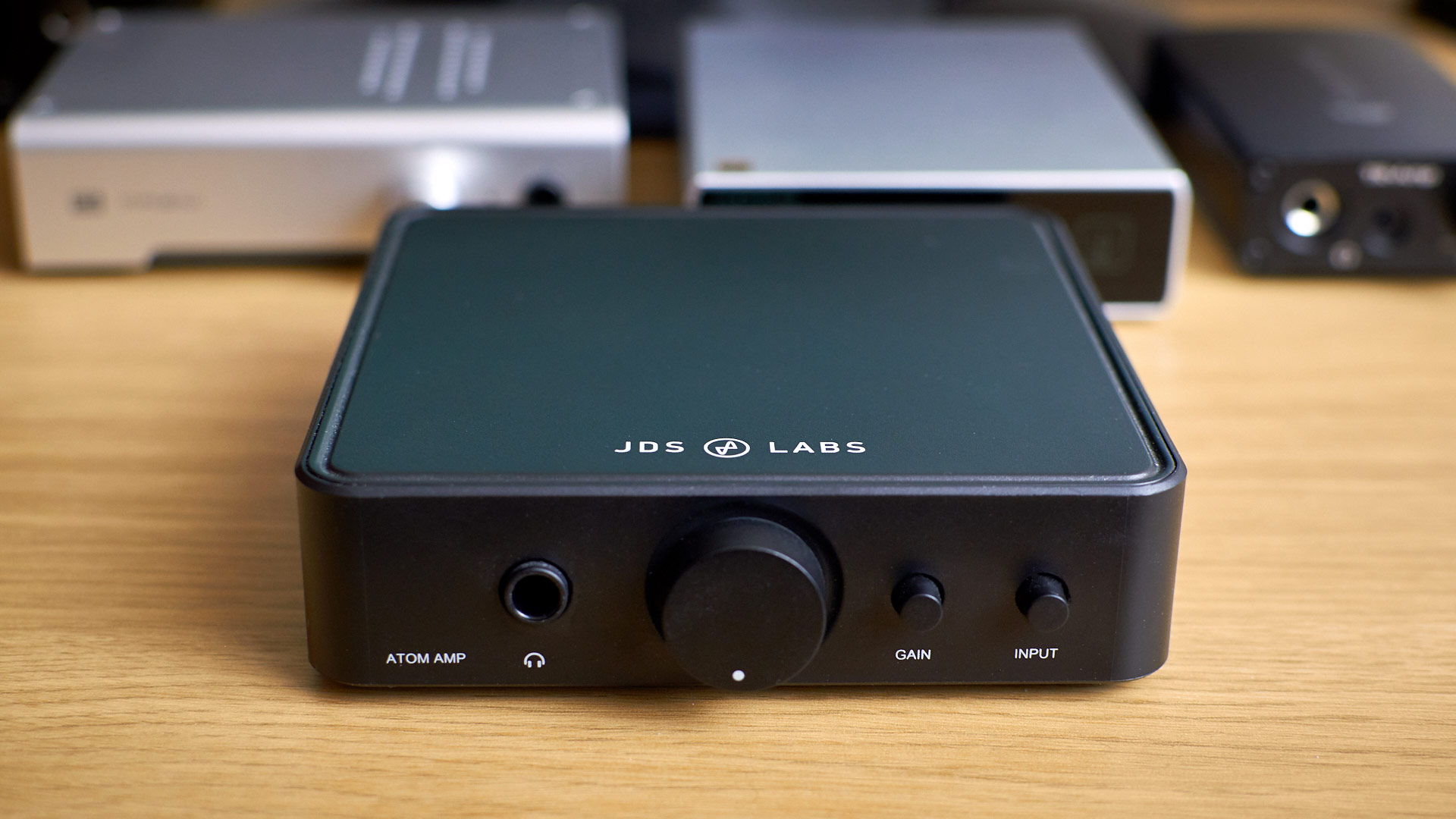 JDS Labs Atom Amp doesn’t need much introduction. It’s probably one of the most popular headphone amps in the budget segment today. That’s why I was curious to try it out and compare it with some other budget offerings on the market. So let’s dig in.

Regarding build quality, there’s really not much to say. Atom is made of plain plastic with a kind of flimsy feeling to it. It doesn’t really compare well to most of the competitors that are rocking aluminum chassis.

Connectivity is strong on the other hand. In the back, we find a pair of RCA line inputs, as well as line output so you can easily connect both Atom and an integrated amp or active speakers to your DAC. Other than that, there’s an additional 3.5 mm line input, meaning you can have two sources connected to the amp at the same time. In the front, we see input selector, low/high gain selector, 6.35 mm headphone jack, and of course volume knob that doubles as the power switch.

Leaving a mediocre build and pretty decent connectivity aside, let us proceed to the most important thing and that’s sound quality.

Hooked to a very capable Topping E30 DAC and feeding my Hifiman HE-4XX, JDS Labs Atom treated me with a very balanced sound. No part of the frequency spectrum was trying to hijack the show. The weighty bassline is punchy and well-controlled, it doesn’t add excessive fat or spill into the midrange. The midrange itself is neutral and vocals sound full-bodied. I could never detect any unpleasant grain or hissing in both male and female voices. The same goes for the highest range which offers a respectable amount of details without ever stepping into sharpness or edginess.

But if you’d think Atom sounds boring, I’m glad to say that’s not the case. Decent energy and dynamics produced by this unit are making sure of it. No matter your music preferences, Atom has a nice sense of rhythm and attack. It never sounded flat or left me wanting more bite.

Trying it with few more DACs and headphones I had at hand, didn’t change my impression. Atom is definitely a capable and balanced-sounding amp.

I was interested to compare Atom directly to some of the devices I had at hand.

Fiio K5 pro was first in line. I quite like this DAC/Amp combo and it proved to be a decent competitor to E30/Atom stack. I noticed that K5 pro is capable of digging a bit more texture from the upper mids and high frequencies. Its bassline has a touch more warmth and the sound is a bit more laid back in general. E30/Atom proved to be more capable when it comes to energetic tones and overall liveliness of the sound. If I was pressed to choose one, I’d probably rather go with E30/Atom combo, but I can see some of you going the other way depending on your personal taste.

Schiit Magni 3 is a head-amp with the exact same price and similar features, which makes it a direct competitor. Its brushed aluminum build feels more premium, but it also sounds a bit better to my ears. First of all, there’s a greater sense of presence to all notes with Magni 3. Secondly, it is capable of producing crisper edges and a more tone texture. For example, listening to Tom Waits’ raspy vocal trough Atom felt a bit more padded and distant than trough Magni 3. Comparing them further I kept feeling that Atom is a bit more distant and hollow-sounding, not able to completely match Magni’s bold edges and insight into the tone texture. The difference is not huge by any means and I feel both amps are in the same ballpark, but I preferred Magni 3.

EarMen TR-Amp is another DAC/Amp combo I was impressed by recently. Costing $250 it’s roughly as much as you would pay for a decent DAC and AMP stack plus a pair of interconnect cables. Out of all other combinations, I felt TR-Amp offered a bit more clarity and precision than E30/Atom stack or E30/Magni 3 stack for that matter. So it’s definitely worth considering if you don’t mind it’s battery-powered.

JDS Labs Atom Amp is a well-balanced, well-rounded amp. In isolation, I don’t find any real fault with its performance. If you already own one, there’s nothing to worry about as it is a very good product. But given the strong competition in the current market, I do feel that some other devices hold even stronger cards, both in terms of build and sonic abilities.