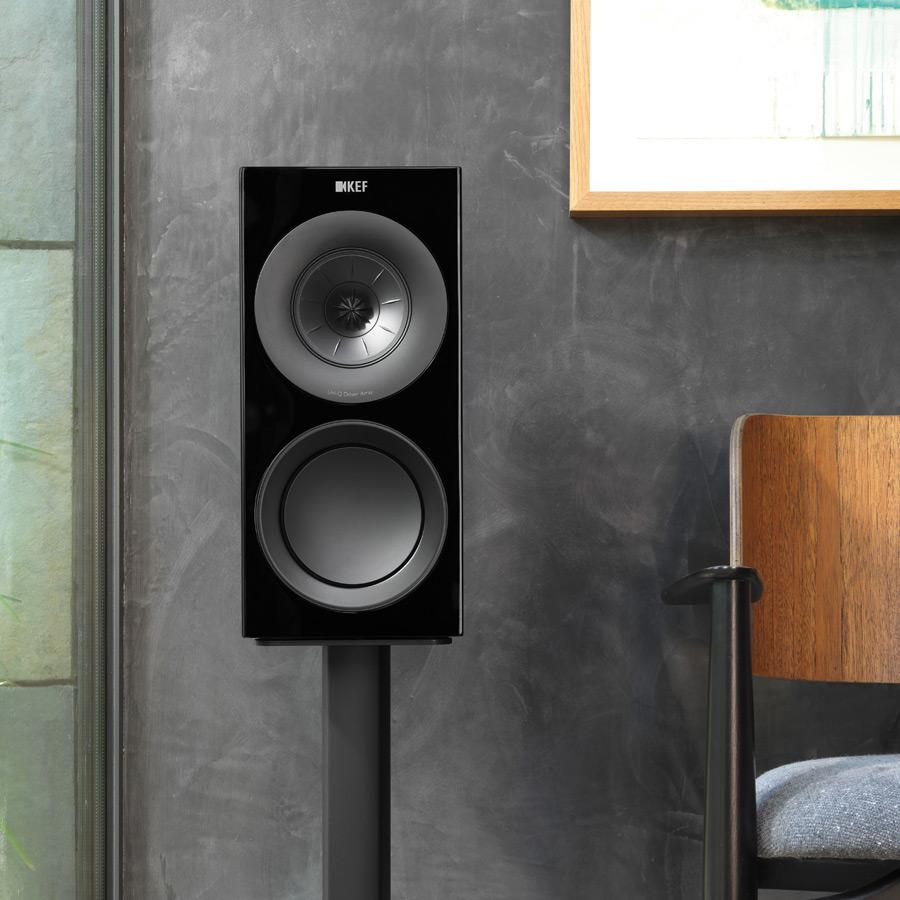 KEF is a well-known brand that needs no introduction amongst the HiFi audience. R3 is the smallest model in the R range, and also the only standmount, with all bigger models being floorstanders. I got this speaker on a loan from a friend, and I was particularly interested to face it against my daily driver – famed LS50. So let me share my impressions.

KEF R3 is a big standmounter, not as wide as it is tall at 42 cm (16.6 in). Thanks to that it actually houses a true three-way design with a dedicated 165 mm (6.5 in ) hybrid aluminium driver. The smaller upper driver is actually a dual concentric one, meaning there are two drivers there actually. One is a 125 mm (6 in) dedicated midrange unit, while in its center we find a tweeter. This arrangement is known as a dual concentric or coaxial, and the KEF is not the only one to utilize it but it is one of the biggest and oldest supporters of it. Anyways, at KEF they call it Uni-Q, and they have been perfecting this technology for many years.

Build quality itself is really good, and the finish is almost impeccable. This “almost” part is deserved by one small detail regarding the plastic cover surrounding the driver units. This plastic ring is not glued or permanently fixed, it’s just slotted around the driver and it looks pretty stylish. However, as many users noticed, my friend, included, it can get a bit loose over time and move from its place just ever so slightly outwards. This alters the frequency response in the higher registers, changing the tonality of the speakers. The simplest solution is to just check the ring from time to time, and press it back in its slot if needed.

As I don’t feel like citing every bit of spec here, and you can find that down in the spec table at the end of the review anyway, I’ll just say that this is one big and mainly quality-made standmounter. Now let’s see how it performs.

Even before getting R3 in my place, I was very familiar with its sound signature from my friend’s place. There it is connected to a Hegel H190 integrated amplifier, that is fed by Chord Qutest DAC, which is again fed by a Lindemann Limetree Bridge streamer. At my place, it was met by a less powerful Hegel H90, fed by Denafrips Ares II DAC, and at the time Allo DigiOne streamer. This created a nice opportunity to access how R3 blends in different systems, but also how it reacts to less or more powerful amps.

KEF R3 is generally speaking well-balanced tonally. You will not notice a bassline that’s out of control, too fat, too warm, or too anything. One of the first things I noticed about it is that it packs a lot of punch. Seriously though, there are smaller floorstanders on the market that can’t match both its depth or sheer kick and slam. If you for any reason can’t host a floorstanding speaker but want the scale and grunt of one in a form of a standmounter – R3 might be the way to go. Fortunately, this kind of grunt is accompanied by good speed and control, if your amplifier is capable enough. Basically, while R3 performed quite well with Hegel H90, the bassline control struggles a bit, having a tendency to become soft and less impactful. Switching to a mightier H190, proved to be a good measure – bass notes feel deeper, tidier, and punchier. A slight feel of bloatedness simply disappeared with higher power and a firmer grip of amplification over these speakers. I haven’t tried it that way, but I’m sensing that a powerful class D amp would be worth exploring here.

Moving away from the bassline, KEF R3 is a neutral and focused performer. Vocals sound natural, with plenty of micro details, but not lacking in body and fullness. Acoustic guitar plucks are focused and energetic, with clear edges and transients, but KEF never crosses the line to become overly sharp or aggressive-sounding, unless you pair it with such gear. Play something with a rich timbre, such as sax, and R3 will do a pretty good job in conveying it without adding much of its own coloration. The highest registers are again very crisp but feel somewhat rolled off to my ears. All of the high-frequency details are there, focused, precise, and easily noticeable, but somehow lacking that last bit of airiness and openness. On a positive note, nothing ever sounded too bright or annoyingly sharp through these speakers. That characteristic does make them an easy listen.

When we start talking about dynamics, that’s when KEF R3 shines the most. Speakers of this size and price are rarely as dynamically alive as R3. Give them music material such as Birds by Dominique Fils-Aime, or something by Rodrigo y Gabriela, and you’ll most likely find yourself foot tapping in the middle of the song.

Finally, if soundstage is your main concern, KEF R3 are mostly forward-sounding speakers. If the rest of the system is up to the task, they can also pull a very respectable depth too. However, these are definitely more focused than open and spacious sounding, and it probably has something to do with that slight lack of air up top that I’ve already mentioned.

The first thing you’ll probably notice is how deeper and more substantial is the bassline of R3 compared to LS50. But it’s not only about the extension, bassline has more kick too, and even the upper bass that’s well present on LS50s simply has more slam with R3. Dynamic swings are also greater and handled with more ease, making LS50 sound a bit compressed and dynamically flat in a direct comparison.

Where LS50 bytes back is in the upper registers. Starting with the upper bass, it feels like it has more texture and details. Move to the midrange and similar impression persist, LS50 feels like it can uncover more texture from female vocals for example. Finally, highs are more prominent and noticeably airier, making you feel like somebody just shone a light over the instruments.

There is no winner in this comparison as far as I’m concerned. R3 has more grunt, slam, and greater dynamics. LS50 creates insanely precise tones that are more textured and airy. Which qualities are more important? Well, that’s something only you can decide for yourself. I personally found myself craving for LS50s openness while auditioning R3s, but that’s only me. I can’t claim that I’m completely unbiased here as I live with a pair of LS50s for some time now and I really do enjoy their sound signature immensely.

Worth mentioning is this too – adding a subwoofer to LS50 will help with the extension, and you will get something that sounds like a bigger and deeper LS50, but the sheer slam and dynamics that R3 posses can’t be matched this way.

KEF R3 is a big standmounter by today’s standards, and it has dynamic and authoritative sound to show for it. It’s also mostly neutral and should let your’s system sound signature shine through. Just beware that less powerful amps won’t do it complete justice. Pair it with something potent instead and you’re in for a lot of fun.