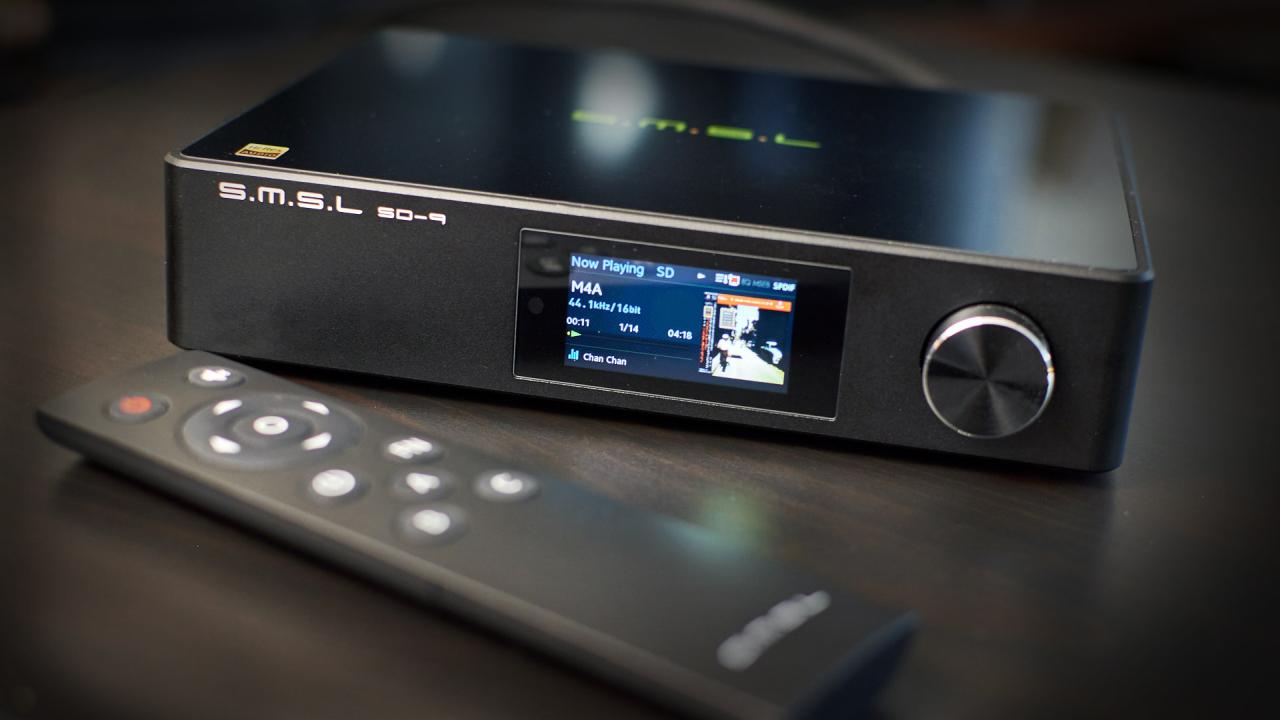 SMSL SD-9 is a digital audio streamer costing 400 USD. For that amount, you’re getting a device with plenty of digital connections, and hopefully, a sound quality that will surpass any general-purpose PC. Now, I’m well aware that there is a whole bunch of audiophiles believing that digital signal is uncorrectable and always the same, but that’s only an idealized theory. Reality is a little bit different, and because of that audio streamers can lift the performance level of your system quite a bit. But enough with general chat, let’s see how this particular streamer fares.

SMSL SD-9 is a beautifully finished device. The body is mostly made of aluminium with an acrylic top that looks gorgeous but it is a fingerprint magnet. The front of the unit features a small color display and a navigation knob. Remote control is also provided in the box.

Talking about connections, SMSL SD-9 will hardly leave anyone wanting more. Starting with the inputs, you can pull your music from the network (streaming services, NAS, etc.) either through the Ethernet port or WiFi. You can also connect it directly to a PC using a USB-B port, but you can also attach an external flash drive or hard disks using two USB-A ports. There is a micro SD slot too so you can load your music from the card. Finally, if you don’t care about every last bit of audio fidelity, you can opt to use a Bluetooth connection too.

On the other side, we have multiple digital outputs, so brace yourself cause you’re in for a ride. You can connect SD-9 to a DAC using USB, Coaxial or Optical SPDIF, AES/EBU, and finally I2S connection. I don’t think there’s anything left out really, so you’re covered no matter what DAC you might have and which connection you prefer.

SMSL SD-9 is really nice to work within a desktop environment, where you can fully utilize its good but small color display, browse menus and see album covers. Use it in a room setup, in the HiFi rack, and you’ll quickly find yourself getting up to change settings.

Native UI interface is clean and filled with useful features. Some of the most interesting ones are an equalizer and full DSP processing that lets you alter the sound in more ways than I care to explain in this review. Just a few examples would be changing the tone color or vocal sibilance. An important thing to mention here is that while EQ will work with any possible source, advanced DSP is limited to files up to 96 kHz. I suppose this is a technical limitation due to the increased processing power required for such effects to be done in real-time with higher sample-rate files.

Now it’s time to mention a few unpolished things I noticed while testing the unit. Instead of using some sort of dedicated app, SD-9 is meant to be controlled by a Hiby player on your phone. But since Hiby doesn’t support my favorite streaming services, I resorted to third-party apps such are Mconnect and Bubble UPnP. With Mconnect, I experienced regular freezes and connection losses so it was practically unusable. Luckily, Bubble UPnP was cooperating much better so I was able to stream my music from Tidal and Qobuz. Connection loss would still arise occasionally and a restart of the app and streamer was needed to solve it. This happened maybe once in two days. Another thing that seems unpolished is this. While I’m streaming my music using UPnP protocol, and I want to change some settings (let’s say EQ), I would need to exit the UPnP connection first and stop my music, then go change settings, then connect to UPnP again. Now imagine trying to fine-tune EQ this way – it’s exhausting.

On a positive note, there is the ability to update firmware on this unit, but until the end of my testing, no update was available on the manufacturer’s website.

Once up and running, SMSL SD-9 produces well-balanced and focused sound. No part of the spectrum feels emphasized to my ears. The bassline is punchy but quick and well-controlled. The midrange is clear, with present and palpable tones, and crisp leading edges. The highest spectrum is detailed and revealing but never excessive. My favorite female vocals sounded present, tonally correct, and rich with timbre. Norah Jones sounds as sandy as ever, without any sibilance or artificial warmth for that matter. Plucks of the string instruments are energetic and life-like, with bot enough natural richness and zing on the leading edges. I browsed through many music genres and couldn’t really find any fault with this streamer’s presentation. Its sound signature is well balanced, both tonally and dynamically. Soundstage felt decently wide and tall, but the spatial presentation has more of a forward character, so depth is reasonable but nothing to write home about. The layering and separation of the instruments are pretty good though.

Engaging EQ or DSP can make you alter the tonality any way you want, but be aware that you will lose some of the sound fidelity immediately after doing so. So banding tonality to your will comes at a cost of losing some of the transparency and sound liveliness. Some may be fully prepared to do so, but I’m not, especially when there’s nothing wrong with SD-9’s tonality to start with.

Allo DigiOne is a more affordable streamer based on a Raspberry Pi with an audiophile HAT. Backed with a decent linear power supply this one sounds very smooth and relaxed, but it can’t match SD-9 when it comes to sheer resolution. SMSL managed to create a device with a firmer and tidier bassline. Edges of any tone such as plucks of the strings or kick of the drums carry more energy and excitement. DigiOne also rolled off quicker in the highest register, sounding darker and less airy. When you actually count in DigiOne board, Raspberry Pi, and finally a decent low noise power supply, then you realize that SMSL SD-9 is just slightly more expensive but better sounding. So SD-9 is a clear winner here.

Pi2AES is yet another RaspberryPi-based streamer since those are most common at this price point. It’s more expensive than Allo DigiOne and when fully assembled in a functional streamer with a casing and power supply, it costs similar to SD-9. That said, Pi2AES creates an even cleaner sound with better layering and pinpointing of the instruments. Soundstage is somewhat laid back, it starts behind the speakers but goes noticeably deeper too. SD-9 projects the soundstage in a more forward manner, it sounds a bit fuller but also more congested. I would personally give this round to the Pi2AES, but they are close enough that depending on your personal taste, and the rest of the system, you might feel different and prefer SD-9.

SMSL SD-9 is a nicely built streamer that’s filled with features and connectivity. It looks very nice and sounds really good too. If not for some unpolished UI decisions and unable UPnP connectivity, I would give it my highest recommendation. But as things stand at the time of writing, some points have to be deducted on the account of the software side of things. I hope that the manufacturer will provide a firmware update and address these quirks. If and when that happens, I’ll be glad to revise my score to an even higher one. 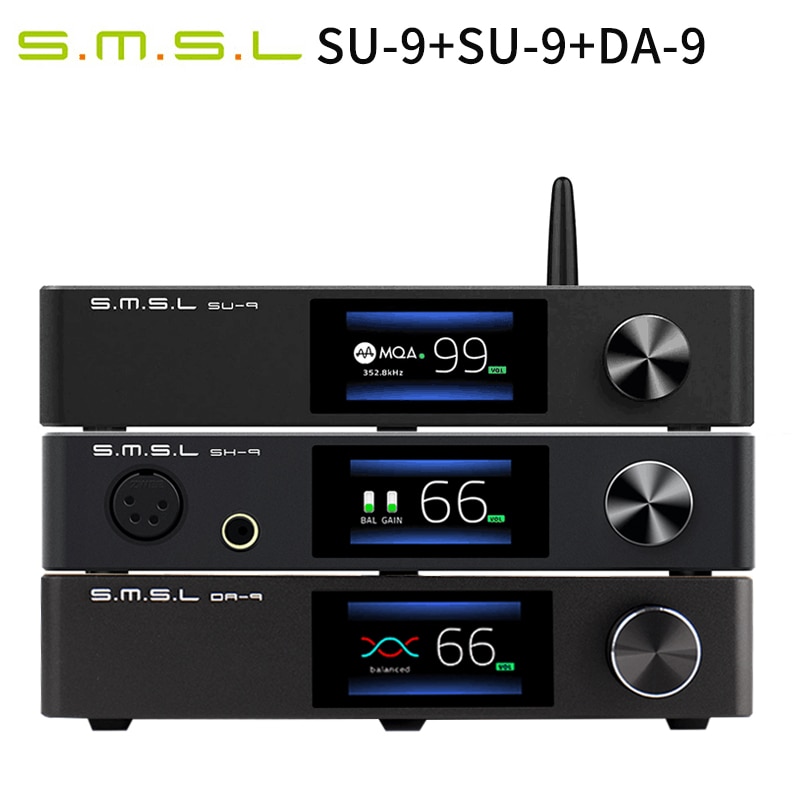