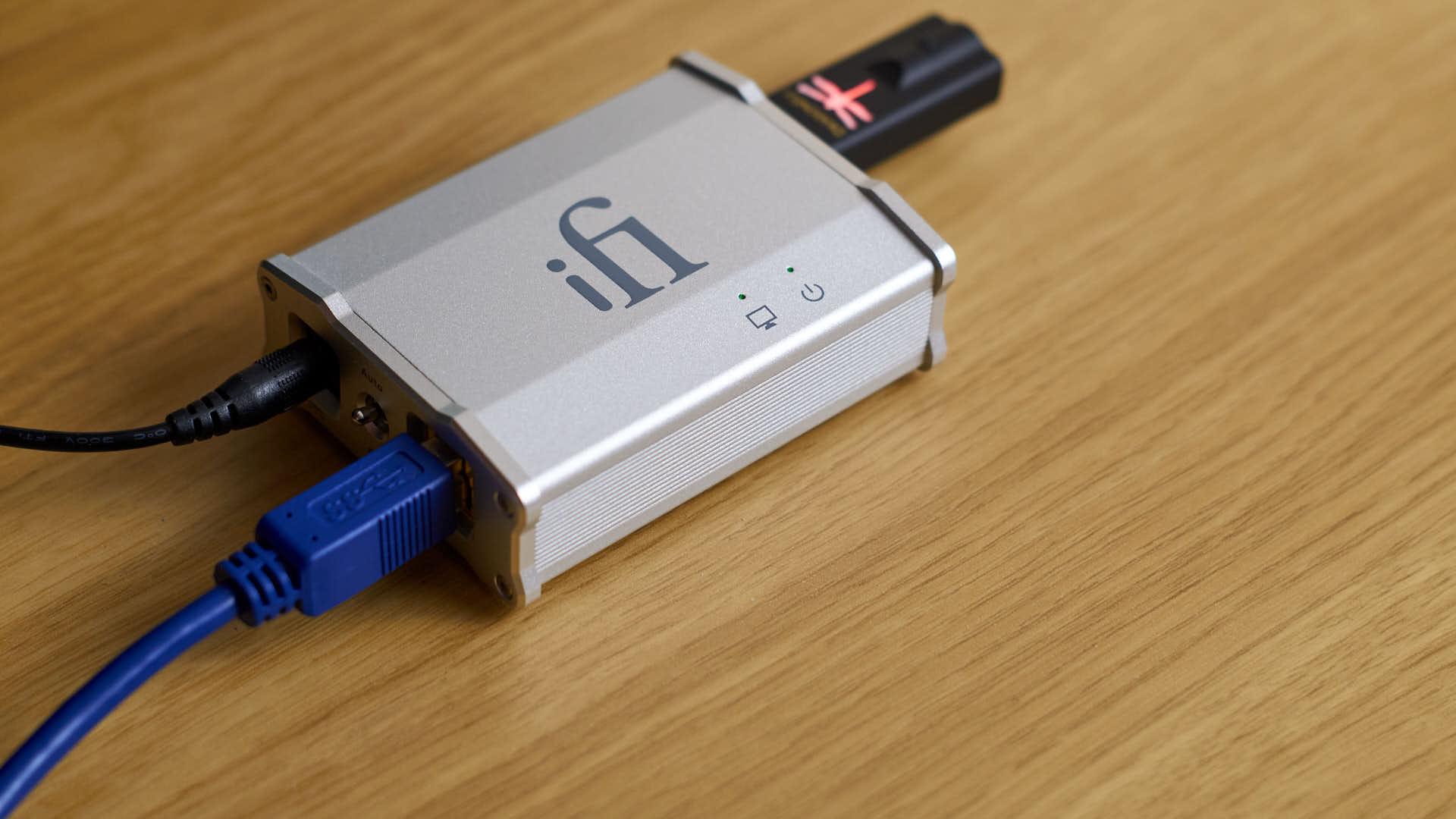 The second USB regenerator and recklocker I’ve got my hands on is coming from iFi and it is now discontinued nano iUSB3.0. Why test it then? You ask. Well, as you may know, I was mildly impressed with Schiit Wyrd I purchased just a week before. So when an acquaintance offered me this one for a spin, I gladly accepted. When new, nano iUSB3.0 used to cost 2 to 2.5 times more than Wyrd and I was interested to hear if that is justified.

The device itself is a compact aluminum box, small but sturdy. On one side we find USB 3.0 input and power connector. The switch there decides should the device be ON all the time or should it turn OFF automatically when no signal is detected. The other side hosts two USB outputs. One is for both signal and power, while the other one is power only. This feature is very neat as it serves a clean power supply to both DAC and one other 5 V device of your choice. In my case, I used the second one to power a Raspberry Pi 3 based music streamer with cleaner power than its own power brick provides.

Now, I don’t want to go into every single technical detail about nano iUSB3.0. This is what the manufacturer claims it does:

But what I was interested in is – does it have any effect on the sound quality? And if it does, how big it is?

I’ve tried nano iUSB3.0 connected to my desktop PC (Windows 10 LTSB, Album player, Fidelizer free and Minority Clean), Acer Laptop (same OS, Player, and tweaks), and Rasbppery Pi3 B+ with PiMusicBox OS/Player. DACs used were Burson Playmate and Dragonfly Black. I will not go into the case by case description since the conclusion was the same for all possible combinations of sources and DACs. Everything was further connected through my own Cyrus 8vs2 and KEF LS50 setup.

I inserted the nano into the loop and played a few of my favorite tracks. It was sure that nano is making a difference. The very first thing I noticed is that most notes sound just a bit fuller and juicier. The darker background was the next thing I noticed. Those two traits made sound feel a bit more spacious and threedimensional. Quick AB switching confirmed that. The more I listened the more I felt that music is somehow calmer and less nervous too. I felt that I can turn the volume a bit more without tiring my ears.

If I were to do quick AB switching, focusing on things I noticed – I always felt that difference is definitely there but it’s subtle. To tell you honestly, at that moment I was not sold the whole idea and real worth of the device.

After some time I got tired of switching and hunting for those differences, I sat back to listen to some music. That’s when I actually started to realize that the final result is bigger than the sum of its parts. Song after song, I felt that instruments are more present in my room, more palpable than I ever remember them to be. Occasionally a long-lasting after tone would linger for so long, it put a smile on my face. I also noticed some really busy passages, that used to make me squint and reach for a remote to lower the volume, sounded more organized and more pleasurable. Remote reaching reflex doesn’t kick in nearly as often as without nano.

In the long run, all of these arguably small and subtle differences combined themselves into a whole that just feels right.

Admittedly, my experience with USB regenerators is limited. I’ve only tried Schiit Wyrd before. I felt it made a positive difference, but definitely not as big as this one. iFi nano iUSB3.0 takes it up a notch, adding more background darkness, dimensionality, and palpability than Wyrd is capable of. It was also more than twice the price so maybe that’s a reasonable thing to expect anyway.

Today I’m not going to tell you if you should buy this or any similar device. I made that argument in a Schiit Wyrd review, in a WHO IS IT FOR section. I’ll finish this review on a more personal note instead.

Several days later I faced the decision to purchase this unit from its owner or not. He owns both nano iUSB3.0 and micro iUSB3.0, he doesn’t need them both so one was up for sale. I disconnected the nano and took it out of the loop. My ears, now used to it, didn’t welcome that move at all. They didn’t care that differences analyzed part by part are subtle. I listened to a few songs, slowly losing interest, feeling sad due to a sudden loss of depth and richness, and a decreased physicality of the sound. Now, I know it’s just a matter of discipline and that the feeling would pass in a few days. But no one is really good at disciplining oneself, especially audiophiles.

I finally put it back in my system, called the previous owner and told him that his nano has found itself a new and loving home.

One thought on “iFi nano iUSB3.0 – a skillful USB regenerator”