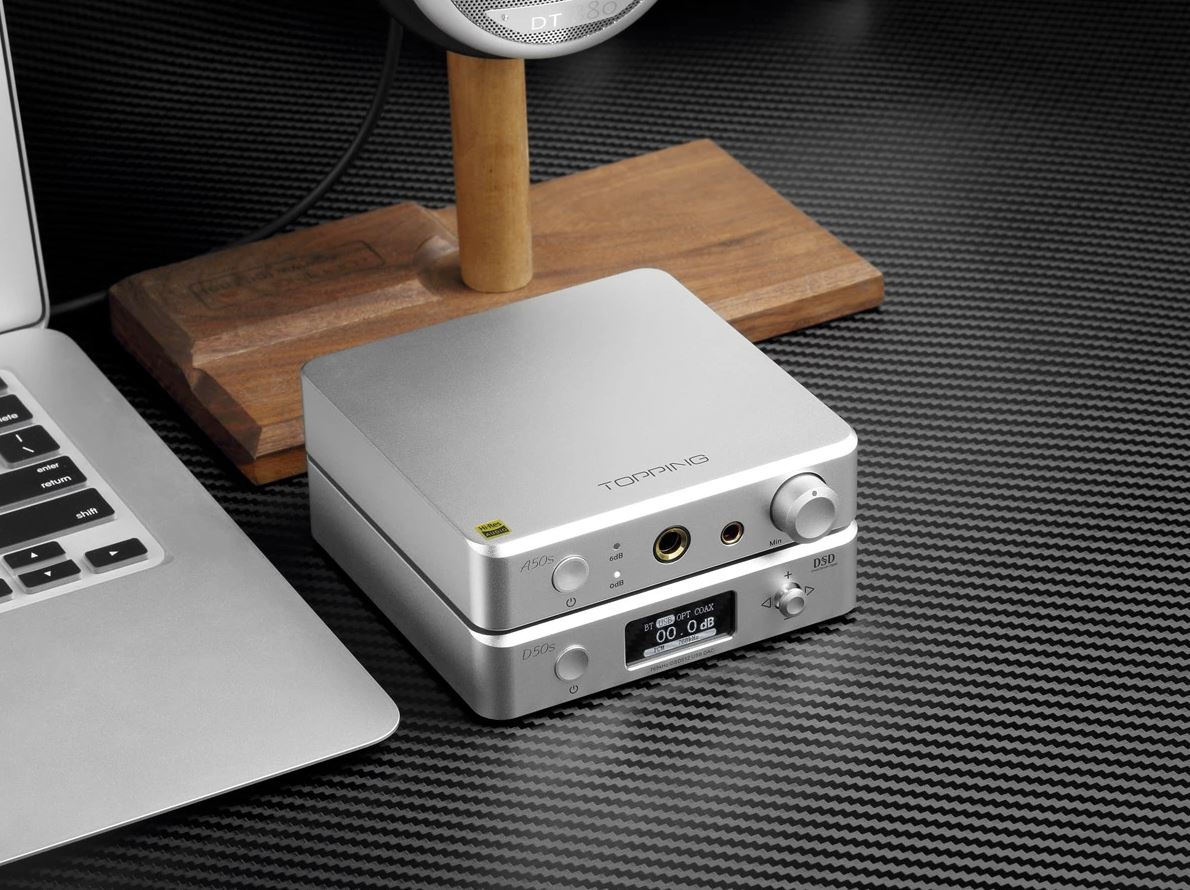 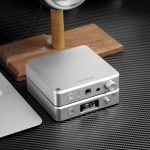 Topping A50s is a small headphone amplifier, the second-most affordable one in Topping’s lineup. However, it does have few tricks up its sleeve to justify the small price hike compared to its less pricy cousin L30. So without much ado, let’s dig in and find out all about it.

Topping A50s is small, palm-sized, amplifier that will not consume much space on your desktop. Still, a diminutive size doesn’t take anything from its great build quality. The moment I picked it up, I realized it’s weightier and more solid than you’re average piece of gear at this price. However, I was not surprised as I already have experience with D50s which is a matching DAC that shares the same factory form. These two are meant to be stackable and look nice in the process.

The back panel hosts a set of RCA inputs, as well as RCA outputs that work in preamp mode, meaning they are not a simple pass-through but are affected by the volume control. Power connector accepts 15 VDC so don’t try to mix and match power brick from Topping L30 which is an AC one.

The front panel offers a power button (press and hold) that doubles as a gain selector (short press). That said, you can opt for either 0 dB or 9 dB gain which should cover a wide variety of headphones with different sensitivity. Finally, there are two headphone outputs too. The first one is your typical single-ended 6.35 mm one (6.35 to 3.5 mm adapter is provided in the box) while the smaller one next to it is a 4.4 mm balanced Pentaccon out.

As you might already know, I don’t particularly enjoy repeating marketing terms and boasting specs so I’ll go through this part quickly and mention the important things only.

A50s is supposedly using the same NFCA (Nested Feedback Composite Amplifier) module from the brand’s flagship model A90. There are some other cool-sounding terms such as UHGF (Ultra High Gain Feedback) and impressively low noise and distortion numbers, etc. I’ll just mention the same thing I did for L30 – The maximum output power of A50s is a respectable 3.5 W @ 16 Ohm, but only if the unit is fed with 3.0 V on its input. Given that most DACs provide a line signal of around 2.0 V, we’re realistically looking at somewhat lesser numbers. But worry not, there’s still plenty of power to go around.

I started testing using single-ended output as that is still a much more common one. It was immediately evident that A50s is related to the L30 I recently reviewed. A50s too sounds clean and precise. The bassline is fast and well behaved. It can go deep when needed but it starts and stops quickly. Midbass is also on the tight and controlled side of things, someone could call it lean, so don’t expect any warmth and pleasant bloom to pad your notes. Going up the frequency spectrum, the midrange is clear, it can reveal a lot of details and feels neutral in its nature. The highest region is again crisp and incisive.

Spatial arrangement is good with a reasonably wide soundstage and very nice layering skills. Depth on the other hand is not that pronounced. When it comes to drive and dynamics, I never dealt with them lacking with my Hifiman HE-4xx.

Switching to the balanced connection I immediately noticed even more drive. Bass notes sound juicer and pack more punch. The soundstage grew in scale and layering improved so it was easier to discern individual instruments. Even tone timbre and tone decay benefit this way, notes felt richer and lingered in the air longer.

All of these small but clearly observable improvements made me forget about testing and I just kept enjoying the music. Finally, I did make myself go back to the single-ended out once more – it simply sounded flatter and thinner. It took me fifteen seconds to realize that and start wishing to switch to the balanced one again.

Topping L30 is slightly more affordable with its price tag of $139. It offers single-ended output only, but even single-ended out on A50s sounds slightly livelier and with a bit more layering. The difference is not big by any means but it’s noticeable when you listen critically. Switching to A50s’ balanced out is what really makes A50s dominate this duel. Soundstage expands, layering and dynamics improv, and E30 just can’t match anymore.

JDS Labs Atom sounds more laid back and reveals fewer details. It’s pleasant but somewhat hollow sounding in comparison. A50s is able to present edges with more energy, dig more micro details, and air from the recording without even resorting to its balanced out. Utilizing that one A50s is just in another league altogether, and so is its build quality. To be perfectly fair here, Atom is half the price but if you can stretch the budget it’ll be worth the effort.

Topping A50s on paper looks like an L30 with the addition of balanced output. But even without using that one, it manages to sound slightly better. If you’re only able to use a single-ended connection it would represent a very good and powerful solution, capable of driving almost anything you throw at it. For those able to utilize balanced out, A50s is a no-brainer really.

The unit I had for a review was a kind loan from an audiophile fellow and a countryman. If that was an option, I would gladly exchange my own L30 and sixty bucks (which is the price difference between the two) for his A50s. 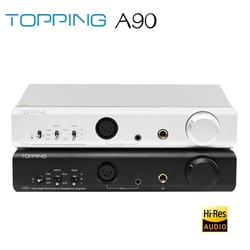