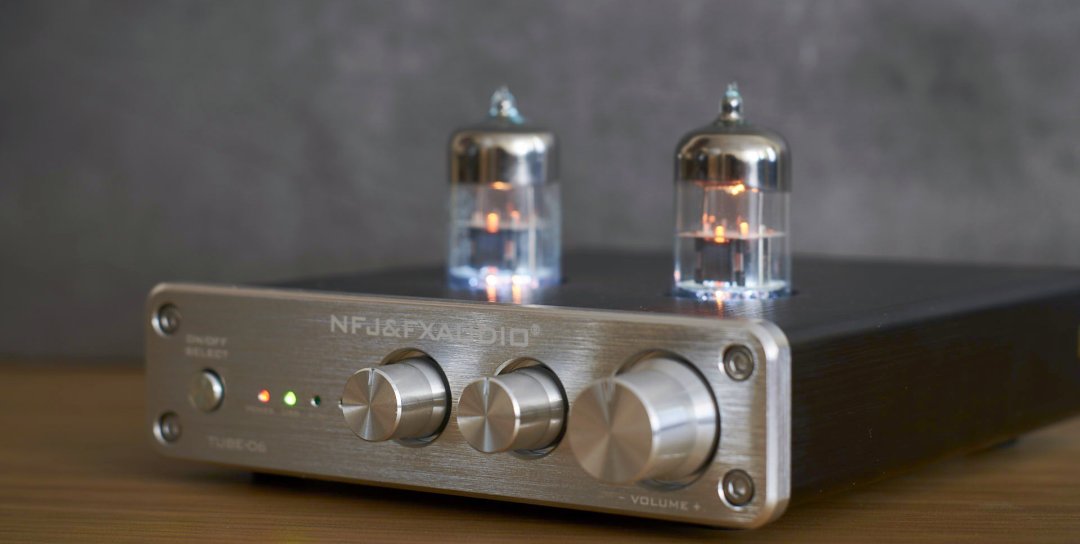 FX-Audio TUBE 06 is a preamp with both digital and analog inputs. The line between preamps and DACs is thin nowadays because any DAC can act as a digital preamp if it has a volume control. But a real old school preamp like this one offers some additional functions.

It has tone controls on the front, while you can find both digital and analog inputs on the back. A pair of analog outputs can provide up to 5.8 V over the RCA connectors, which is much higher than the usual 2 V we see on most DACs. That means TUBE 06 is better suited to a wide variety of power amps, no matter their gain or sensitivity. I’ve found that dialing the volume knob to the middle will approximately give an output level that is matching a regular 2 Volts DAC output if for some reason you need to use it that way.

All knobs have a clicky feeling which I liked. What I find curious is there isn’t any mark on the front panel to tell you what is the starting position for the flat sound. I’m assuming it’s at 12 o’clock like it usually is on most tone controls.

The whole case is made of thick brushed aluminum, it feels solid and looks great.  Tubes are nested into slots and they’re easily removable. You can change them if you want but I haven’t done that, so everything I say here about the sound is with the factory tubes. When turned on, tubes light up with nice warm glow and if you’re sharing space with any females I bet they would love it. Tubes also get hot very quickly so better watch for your fingers when the preamp is working.

But what about the sound you ask. Fortunately, there’s some decent sound here to match the looks. We have a soft and warm but yet open sound coming from Tube 06. Why do I say soft and warm? Because that’s how the bass region makes it sound. It’s full, pleasantly warm and rounded, but not the most defined. I also think the unit is a bit bassy by default so in my system I prefer the bass knob a few clicks to the left.

Going to the midrange, it’s again pleasantly full making vocals and instruments sound present. I liked the balance we have here – with both lower midrange to give us body and higher midrange to draw edges and details, giving pleasant huskiness to vocals.  If you expected highs to sound muffled or veiled because of tubes you would be wrong. On the contrary, they are quite detailed and pronounced, which is the reason I used the word open when I started to talk about the sound. In my system, I preferred to tame those highs just a bit. That might be different in your system though.

There is a very decent soundstage here, it spreads wide while depth is not that pronounced. You get an up-front type of sound which is the opposite of laid back, some people would connect tubes with. The only softness I’ve detected anywhere is in the already mentioned bass region. It’s more warm and fuzzy but may lack some speed and kick, making it better suited for late-night jazz than some fisty electro music. All in all Tube 06 can provide a lush and wide sound for its price range.

I’ve done most of the testing using a digital input, but I also tried using other separate DACs as a source. In that case, I connecting them to the analog input of Tube 06, bypassing its internal DAC. That sounded OK but I never felt I gain anything by doing that. On the contrary, I achieved the best results using digital input and internal DAC.

FX-Audio Tube 06 can act as any other DAC but also has additional analog inputs. You can use them to connect any of the devices with analog output like a CD player, or your phone straight out of headphones jack, etc. If you don’t need these preamp abilities and you would basically use it only with its digital input, you have other means of controlling volume and tone… Then you should look for a pure DAC because some of them can provide even more clarity and dynamics for the price. One of them is FX’s own DAC X6 that I previously reviewed and liked. SMSL M100 also comes to mind. But that’s not a fair comparison by any means because this is a real preamp and not just a DAC with added attenuation.

If you actually do need analog preamp abilities and tone controls this is a good deal. FX-Audio Tube 06 is well built, good looking and nice sounding product that has no trouble justifying its affordable price tag. Just pair it with any headphone amp or power amp of similar class, and you’re good to go.