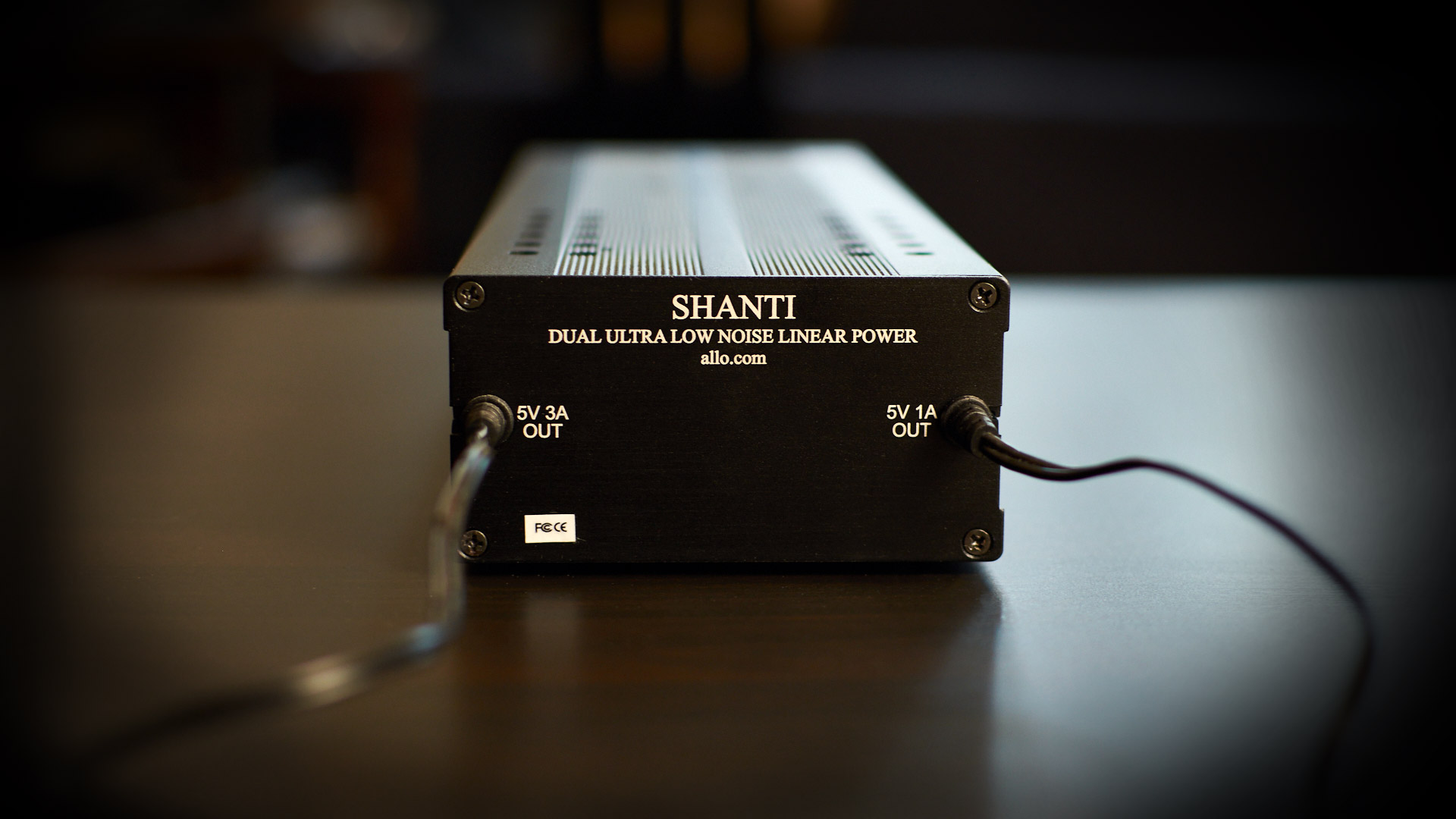 Allo is a company best known for its Raspberry Pi audiophile HATs, but today, we’re talking about their linear power supply named Shanti. You might have already heard that a good power supply is very important when it comes to an audio device and its final audio quality. If the device is juiced through an AC inlet that accepts 110 or 220 V, it means that the whole power supply is placed inside the unit itself. But a lot of DACs and streamers are powered by a 5 V DC, meaning that the whole power supply thing (that turns our 110/220 V AC into those 5 V DC) is left to the user to think about. Well, the factory will usually provide a very low-quality wall wart with a very noisy 5 V output, but that’s not an ideal solution. If you aim towards high-fidelity audio, a low noise power supply is basically a must. Allo Shanti just happens to be one of those.

Allo Shanti is basically a dual linear power supply. Dual, in this case, means it provides two separate outputs that can be used to power two separate devices. Both are 5 V but the difference is that one can provide up to 3 A of current while the other one is capable of a more modest 1.2 A. As no DAC I’ve ever encountered needed more than 1 Amper, I think of this “weaker” out as a DAC out. The more potent one, providing up to 3 Ampers is clearly meant to power some more power-hungry device such as a Raspberry Pi based music streamer. At the end of both cables sit a standard 5.5 X 2.1mm power jack, but in the box, you also get six adapters that’ll help you match the connector to any possible power input your device is using. Among those six, micro-USB and USB Type-C are also provided. This is a very thoughtful and very practical detail.

On the back of the unit, there’s a standard IEC power inlet, a power switch, and a selector between 110 and 220 Volts. But there’s also a binding post with a ground marking. This one can be used to provide an electrical ground to your streamer by simply connecting the casing of a streamer to this binding post. Allo claims this creates a star-grounding scheme that helps further reduce electrical noise.

If we take a look inside the box, beside the transformer, the view is mostly dominated by a huge bank of capacitors. Using a transformer is what makes a power supply linear, meaning it’s not a switching power supply that tends to introduce noise back into the electrical network it’s connected to. A huge bank of capacitors acts as an energy reservoir that makes the voltage more stable and reduces the output impedance. Allo boasts that outputs are galvanically isolated and that independent filtering on each rail is used. To cut the story short, all of this should create a very stable and low noise power supply. The manufacturer even backs that up with few measurements on the official web-page (the link is provided in the specification table below the review).

But all said and done, what difference does it make when introduced into your HiFi system?

My first encounter with Allo Shanti was in my friend’s system where he used it to power both his DAC and Allo USBridge streamer. I was positively surprised by the results so I’ve decided to purchase one myself. In my own system, I use the 3 A rail to power my Raspberry Pi streamer with Allo DigiOne HAT. The 1 A rail was used to power at least ten different DACs that came and went. That said, there was never a DAC that didn’t react positively once fed with this linear power supply instead of a cheap switching one that they’re usually supplied with out of the box.

Every time calmer and darker background was easily noticeable, allowing for a deeper soundstage and noticing subtle details easier. These small breaths next to the microphone, or nails moving slowly over the strings, or just some crackling of the chair under the musician… If it’s in the recording itself, Allo Shanti will help you hear it by lifting a veil you didn’t even know was there before, but it was and it was obscuring those subtle details. But it’s not just about tiny details, in this newfound clarity tone decay is followed more easily, allowing the instrument to linger a bit longer, and letting you track echoes and soak up more spatial information. Layering improves too and leading edges are crisper. To keep it simple, basically, every aspect of the sound improves immensely compared to free in-box power supplies.

Now, what is the scale of this improvement you ask? While I can’t put numbers and percentages on the sound quality, the difference itself is not subtle at all, but a very noticeable step up. The kind you get when moving from, let’s say, a good $500 amp to a good $1000 one. Everything, from resolution to dynamics improves, and even if you were perfectly happy with the more affordable one, you’re well aware of the class difference.

iFi iPower – is one of the most affordable low noise power supplies on the market, costing just $50. This one is not linear but instead, it’s a well-thought low-noise switching power design. As such, it is also a very decent improvement over bundled units. But compared to Allo Shanti here, it just can’t match the clarity and the amount of veil lifting. My rough estimate is that used on a streamer or a DAC, or both of these, iPower will get you half the way to what Shanti can offer. If you need it to power only one device, and you’re short on a budget, it’s still a good option. But if you need two power supplies for both a DAC and a streamer, in that case, you’d have to purchase two iPowers, which would sum up to $100. At that point, Shanti’s price is not that far ahead and to me, it looks like a much more sensible decision considering its superior sonic results.

Weiliang Audio Dual linear power supply – represents a step up compared to the iFi iPower in terms of resolution and overall clarity. That said, I feel it’s better value than two iPowers and a very good solution for the entry-level HiFi systems that might not be revealing enough to fully benefit from Shanti’s qualities. However, for transparent systems and digital sources, stretching your budget and reaching for the Shanti will reward you with even more clarity, better layering, and a more expansive soundstage.

Allo might be best known for its Raspberry Pi add-ons (or HATs), but their first entry into the power supply market is nothing if not impressive. Anybody serious about their digital source, that can be fed with five volts, should give a try to a good, clean, power supply and witness its benefits. Now, I don’t really have experience with the higher-end products (SOtM and such), but as far as affordable ones go, I have yet to hear anything able to measure to Allo Shanti’s sonics. It’s very practical too with its two rails and many adapters. Highly recommended.

Max2Play store offers everything R-Pi in one place, including Allo products. Please use the code iiWiReviews2020 during any purchase to get a 1-year free license. This would also generate a small return income to the iiWi as well and it would be much appreciated. Thank you! 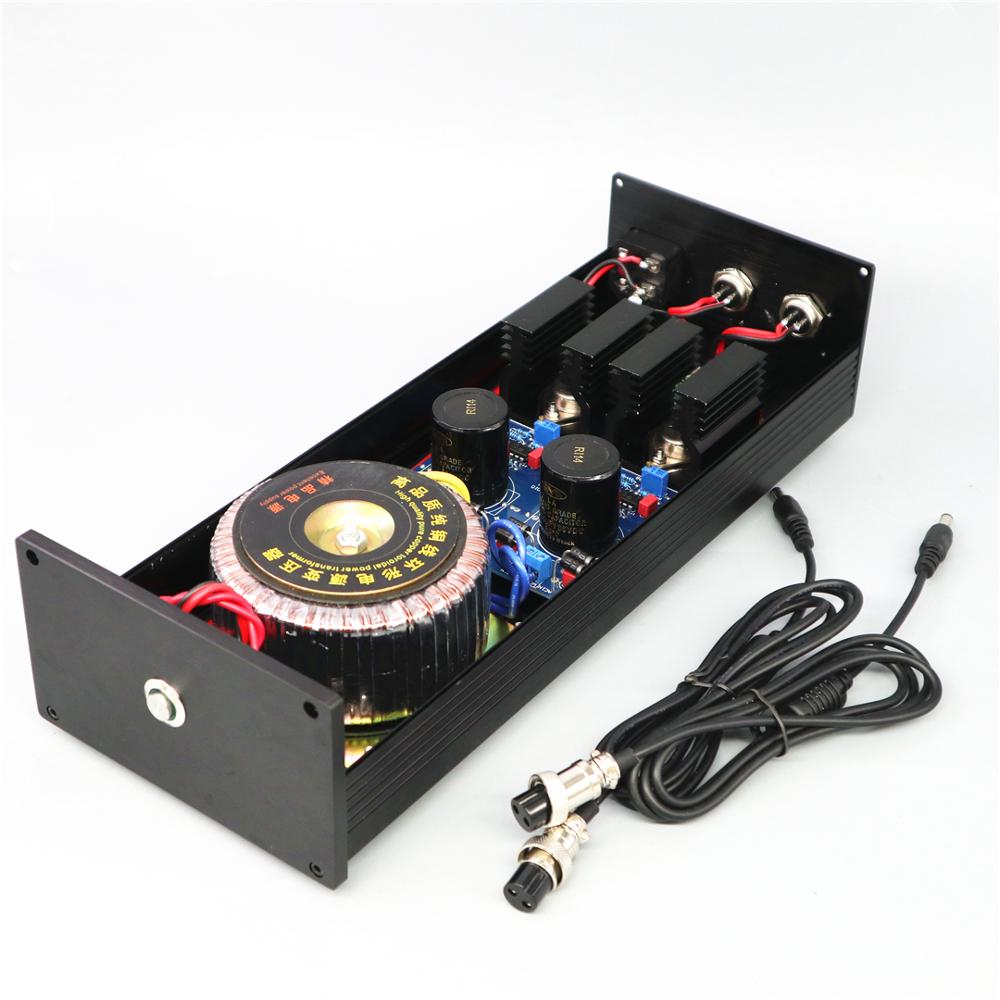